“The inspiration for the novel and the factions were based on my views about human nature, and that virtue as an end in itself may not really be a good thing,” said Veronica Roth of her debut novel, Divergent, in a recent interview.

Virtue as an end in itself may not really be a good thing. The author suggests that by trying to be “good,” whatever “good” may mean to one group or another, we lose something of ourselves. Does “doing the right thing”--if it’s defined by someone else or society at large--mean that we deny who we are? Beatrice Prior, the narrator of Divergent, feels torn when she must choose between the five factions of her society. She knows that if she does not choose her family’s faction, the selfless Abnegation, she will have to leave them behind, possibly forever. But from the very first, Veronica Roth shows us how drawn her heroine is to Dauntless, the faction that houses the soldiers that guard the borders of their society. They are daring, gutsy, even reckless at times.

One of my favorite moments in the book is when Tris realizes that bravery and selflessness are “often… the same thing.” It’s a great way to get teens thinking about what constitutes selflessness and bravery, and how we decide which actions are true to us, and which ones betray our sense of who we are. But she also taps into the idea that there are shades of gray. In that same interview, Roth talked about how we often single out cliques in high school as being damaging to kids, but what about in adulthood? Do we ever really graduate from labeling people? Is there really such a thing as a “good girl” and a “bad girl”? A “stoner” or “jock” or “geek”? Doesn’t everyone have more to him or her than one overriding quality?

Roth also invites readers to look more deeply at their families, friends and classmates. To see that there’s more to them. None of us fits easily into boxes. Most of us are, in fact, divergent. Does that make us “dangerous”? Perhaps only to the people who prefer neat categories.
Posted by twentybyjenny at 6:40 AM No comments:

The Power of Suggestion

As he emulates the artwork of John James Audubon, Doug Swieteck discovers that he cannot paint every feather on the Arctic Tern. Instead, he paints enough lines to suggest countless feathers. He learns that less is more. And his careful attention to detail keeps him firmly planted in the present. He is, as Gary Schmidt’s title suggests, Okay for Now.

Doug is up against some big challenges in the summer of 1968. He is new in town, about to start eighth grade at a new school, his oldest brother is fighting in Vietnam, his middle brother is being accused of burglary, and his father is verbally, often physically abusive. Yet a few key people believe in him. His mother, for one. And at least two teachers. But Mr. Powell may be the greatest influence on Doug. He notices Doug’s interest in the Audubon book at the Marysville Free Public Library, and he approaches Doug. They connect through their mutual admiration for Audubon. The librarian encourages Doug’s curiosity.

does Audubon do it? How does he create the “terrified eye” of The Arctic Tern? The sense of impending doom in The Snowy Heron? Mr. Powell teaches Doug how to look carefully at these images and discover for himself the strategy for creating the mood in these plates as he sketches them. And as he sketches, Doug discovers a strategy for staying in the moment, finding a sense of calm, quieting the rumblings of what may be waiting for him at school or at home with his father. He begins to apply these tools to other areas of his life, and he begins to change.

In a moment of crisis, Doug figures out the right thing to do because of Audubon’s The Yellow Shank. He "step[s] into the middle of the picture, where he should be, with the light behind him and the dark ahead.” The changes Doug makes begin to ripple through his household. As he begins to expect more of himself, those around him subtly begin to expect more of themselves, too. The power of suggestion transforms Doug into a power of example.


Posted by twentybyjenny at 6:46 AM No comments:

¡Enjoy your meal! That is the underlying message of The Cazuela that the Farm Maiden Stirred by Samantha R. Vamos, illustrated by Rafael López.
Children love a good story with a cumulative text. They love the repetition, and the idea that this is all building up to an exciting surprise. Samantha Vamos takes “The House that Jack Built” formula and adds a brilliant twist: she uses Spanish words in place of key characters and ingredients; each contributes to a delicious meal. Her story of just enough cooks in the kitchen gives children delectable morsels such as mantequilla (butter) and azúcar (sugar), and introduces the pato (duck) who visits the mercado (market) on the back of a burro (donkey).

When I had a chance to interview Samantha Vamos recently about Cazuela, she said that the phrase “the cazuela that the farm maiden stirred” came to her when she was short of ingredients one cold Chicago morning and fantasized that she lived on a farm where everything she needed would be handy. The phrase reminded her of “The House that Jack Built,” and she was on her way from there. But she also wanted to create a bilingual text, and the repetition of this framework allowed her to introduce Spanish words to children and invite them to practice the new vocabulary through the repeated phrases. She also liked the idea of featuring a meal in which everyone played a part and enjoyed the fruits of their joint efforts (unlike the animals in The Little Red Hen, who won’t help and therefore don’t get to eat the results). 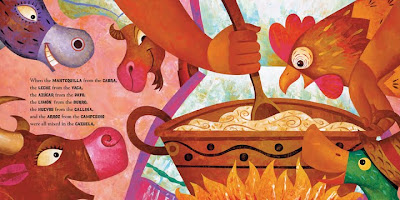 The stunning artwork by Rafael López not only helps give visual clues to the Spanish words, but the artist also makes it seem perfectly normal that a cow would coach a goat, who’s stirring the cream into butter in the kitchen. He includes lots of details to be discovered upon return visits to the book, such as the sun’s moods changing from scene to scene, or the burro’s first appearance. A glossary that helps with pronunciation appears at the end, as well as a recipe for… well, I won’t give it away. But it allows children (with a little help) to prepare a classic Mexican dish just the way the farm maiden, farmer and animals do in the book. And Samantha Vamos also prepared an activity guide with word cards featuring Lopez’s divine illustrations.
Can’t you just see a group of friends putting this on as readers’ theater, and popping up with their word card each time the narrative reaches their part? Vamos said that when she visits schools, the kids like to say the repeated part of the text as quickly as possible, like a tongue twister. And that’s the best part of what books give us: new words to adopt as favorites, exotic words that we can exchange with others—like a great meal prepared and shared together. ¡Buen provecho!
Posted by twentybyjenny at 6:38 PM No comments:

Words are power, especially for toddlers.

When they learn to speak, toddlers go from 0 to 60 in one minute flat. Suddenly, they can ask for things by name, make jokes, express their personalities. Liesbet Slegers knows how to connect with this age group, as she proves once again with Bathing. Her simple black outline and her focus on just a few things on a page—a washcloth mitt with a fish on it, a shampoo bottle with a smiley face—help smallest children to focus, too. There’s just enough on a page to keep them interested without feeling overwhelmed.

Also, she’s not afraid to incorporate slightly more challenging words like “faucet.” She uses it in context (“Look, water is rushing out of the faucet! The bathtub is filling up with water”), and she pictures it clearly, with the toddler hero pointing at the faucet. In 12 pages, Slegers moves the child from running the water in the tub to drying off in a towel. She takes everyday activities and makes them feel like adventures. And to youngest children, they ARE adventures. It’s a constant process of discovery, as if to say, “Look what I can do! I’m making little waves in the water.”
Posted by twentybyjenny at 9:31 PM No comments: