Raina Telgemeier's new graphic novel Sisters is the road trip from Smile that "only gets a passing mention," the author told the audience at School Library Journal's Day of Dialog this past spring.

Telgemeier joked that only after publishing her first book, Smile, did she learn that "you're not supposed to write [an autobiography] unless you've done something." But her books--Sisters and Smile, and also Drama, aimed at slightly older readers--serve as excellent examples for kids who either think they have nothing to write about or are asked to write their autobiography for school. Telgemeier finds the humor and vulnerability in seemingly everyday experiences: a wish for a baby sister that (when finally fulfilled) can have its drawbacks, a parent losing his or her job, and a family vacation.

Her approach, a mix of visual and verbal storytelling, clearly indicates what's fantasy or flashback--or even wishful thinking (when her father loses his job and she would really like a hug). Telgemeier zeroes in on a road trip and also takes that experience as a way to magnify the family dynamics--as traveling and staying in confined spaces will--using it as the jumping off place for flashbacks that add complexity to present events, and fantasy sequences to reflect her characters' changing emotional states.

Her books also let readers know that the more details they can add to their writing, the more universal their experiences feel to readers of their own writing. Telgemeier says, "I tell very personal specific stories, thinking this doesn't happen to anyone else, and then the letters come."
Posted by twentybyjenny at 5:46 AM No comments:


Hervé Tullet turned the world on its ear with Press Here. It was executed with such genius simplicity, that we all wondered why it had never been done before. With Mix It Up!, he holds to that simplicity and does for color what Press Here did for gravity.


The way Tullet plays with cause and effect is eye-opening for any child--from 1 to 92. And "play" is the key word. "Play is the work of childhood," wrote Jean Piaget in his Dreams, and Imitation in Childhood (W. W. Norton, 1962). Through play, a child learns how to resolve conflict, how to negotiate, when to lead and when to step back.

Tullet teaches, through play, what happens when you mix two colors (a new hue emerges), turn a book on its side (the paint runs down the page), and when the child places a hand on the page (you leave an impression). When Tullet and Mo Willems spoke together at New York's Books of Wonder in April 2013, they talked about the importance of play in their own work. "I want my books to be played, not to be read," said Willems, best known for his Pigeon picture books and his Elephant and Piggie beginning readers.

Both author-artists said they draw in order to free themselves. Isn't that play? Neither author admitted to getting stuck ever, nor are they afraid of getting stuck. Tullet quoted a jazz musician who once said that improvisation feels like falling, but you never actually fall. Willems said that each evening, he and his family and any dinner guests on hand all gather around the dining room table where they stretch a giant piece of paper and draw. His dining room walls have a chalkboard surface so they can draw there, too.

Tullet and Willems prove that the best work comes out of play. It's true for children; why shouldn't it be true for adults?
Posted by twentybyjenny at 7:48 AM 1 comment:


When we think of Mary Murphy's books, the word exuberance leaps to mind. Say Hello Like This!, her most recent book for toddlers, emits joy.

As with her I Kissed the Baby!, readers want to follow in line with her characters. She makes you want to kiss a baby and to say hello to every living creature. In Hello Like This!, the animals' joy and playfulness are infectious, from the "licky and loud" dogs ("bow-wow-wow-wow!") to the "silly and happy" hello of the straw-hatted donkeys ("Hee-haw! Hee-haw!"). Delicious sounds teach toddlers new words. They will soon be saying "flappy and clucky" to describe a chicken and "jumpy and croaky" when they spot a frog. 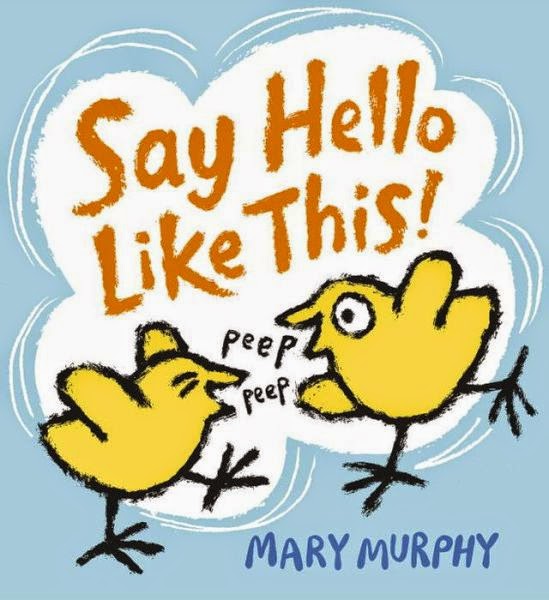 Half-page flaps--thick and durable enough for little hands to hold and turn again and again--chart the creatures' transitions from still and stationary to bursting with excitement and movement. Frogs sitting and gazing at each other from their respective lily pads, with a turn of the page, leap into the air while exclaiming, "croakety croak"! A pair of cats greet each other with a more refined paw-to-paw "purrrrrr... meow."

Murphy's artwork, with its bold outlines and colors, pull young eyes into the pages, searching for hidden details, such as a pair of birds or mice that observe the action. Children will soak up every detail and exclaim, "Again! Again!"

Posted by twentybyjenny at 6:22 AM No comments:


The narrator of Breathe, Annie Breathe! by Miranda Kenneally, is in pain over the recent death of her boyfriend, Kyle, and decides to complete the marathon he'd set out to run. Annie feels guilty because she wants to go to college. How does one grieve and also move forward without feeling like she's somehow wronging the one she loved?

Through flashbacks, we learn that Kyle had wanted to marry Annie. Annie loved Kyle but wanted to complete college first. Then he dies (in a car accident) right after their reconciliation. Annie, who hates running, decides to train for and complete Nashville's Country Music Marathon in his honor. When Coach Woods sees Annie running on a Saturday morning, she offers to put Annie in touch with a friend who prepares runners for marathons. Matt Brown, Annie's running coach, sets down a plan for her so detailed that readers themselves could train for a marathon. Annie tackles her goal in a way that lets readers see why she excels in whatever she sets out to do.

In this way, Miranda Kenneally bears a strong resemblance to her heroine. In an interview, she said that, from the age of eight, Kenneally knew she wanted to be a writer. "I spent my recesses writing really bad stories about poodles that wanted to join the circus," she said. "I worked hard, figured out what I needed to know, and went after it." The author herself trained to run the Marine Corps Marathan in 2005. She writes from experience, as someone who did not think of herself as an athlete, to someone who now can run a marathon (and has also published five YA novels).

In pursuit of her goal, Annie meets other like-minded people, working to complete a marathon for all sorts of reasons. She also meets her coach's brother, a womanizer who develops true feelings for Annie, her perseverance and her dedication. She calls him on his recklessness and--as with her running--opens up to the possibility of life after Kyle.

Somewhere along the way, Kyle's mission becomes Annie's. She wants to complete the marathon as much for herself as for him. Kenneally wisely shows, as Annie works through her complex emotions, that it's possible to hold grief and hope at the same time. One does not negate the other.

Posted by twentybyjenny at 5:52 AM No comments: