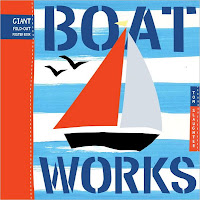 When summer hits, most of us hit the beach. Boat Works by Tom Slaughter makes an ideal guide to harbor-gazing.

A mystery literally unfolds to the solution. The author-artist reveals one detail at a time as the accordion page extends to complete the giant square image. In this way, he directs our attention to the little things that make each boat unique—the sail on a sailboat, the oars of a rowboat. As children revisit the book, they’ll be able to name the anchor, the rope that ties the tugboat to the ocean liner, and also to understand the tugboat’s job—to pull the larger boats (heartening for any small person who wants to stand up and be counted among the bigger people).

The design of the book makes for an ideal guessing game. Each turn of the page exposes a little more information about the boat in question and also completes a little more of the picture. With repeated readings, children will feel smarter as they guess the right answer sooner. And even if you’re not headed to the beach, Boat Works makes a great pre- or post-bathtime read, to complement your child’s experience sailing his or her own boats through the bubbles in the tub. Here’s to smooth sailing!
Posted by twentybyjenny at 7:17 AM No comments:

Keeping the Castle by Patrice Kindle is a wonderful, witty farce that could well lead your teen to Jane Austen. If he or she already knows Jane Austen, then they will appreciate Patrice Kindl’s understanding of the issues at stake for young British men and women at that time. The book is funny and smart and offers teens a way of thinking about how society is set up and the values its members place on things like beauty, intelligence, gender, wealth and a family’s position.

Althea Crawley, as the young woman who’s uniquely placed to keep her family’s castle by marrying a wealthy man, has to consider sacrificing her own happiness for the sake of preserving her family’s lifestyle—and indeed their very survival. This is complicated by the fact that she cannot keep herself from saying what she truly thinks. She scares off one suitor after another.

Many British books and films revolve around class. What you’re born into, and how you get around that. The most humorous scenes in the book arise from the angst of trying to serve food for everyone who comes to Crawley Castle to pay a social call. The people who kindly decline sugar for their tea, because they know the family has very little money and can’t afford such luxuries. Then to come across Mr. Fredericks, who has no finesse at all, who critiques Althea’s family holdings--and who brings Althea to a rude awakening when she realizes how long her family has been low on cash. Mr. Fredericks’ observations about the tapestries and portrait frames reveal to Althea that her father was slowly selling off their valuables to keep the castle even while he was alive.

Mr. Fredericks and his mother are the most like Americans. Practical, hardworking folks in a world in which other people coasted on title and inherited wealth. Althea is in her own way hardworking, certainly resourceful, and has much to recommend her. With character names such as Lord Boring, Prudence and Charity, Kindl telegraphs the depth (or lack of depth) of each. One of the great pleasures of the novel for readers will be knowing who the right match is for Althea before she does.

Posted by twentybyjenny at 3:25 PM No comments:

A couple weeks ago, I wrote about the idea of “the unreliable narrator” in connection with Elizabeth Wein’s Code Name Verity. When it’s done well, it is one of my favorite reading experiences. It’s even rarer to find an unreliable narrator in books aimed at middle graders (fourth through sixth grade), but The False Prince by Jennifer A. Nielsen is an excellent example. We get the feeling from the beginning that narrator Sage knows more than he’s telling us.

Sage has street smarts and trusts no one, so it’s completely in character for him to keep everything close to the vest. He’s an orphan who’s had to do whatever he could to survive, so Nielsen makes it completely feasible that he would be circumspect.

When I was teaching, one of my favorite books to give to third graders was Bill Britain’s The Wish Giver, a Newbery honor book. The same events unfold through the eyes of three different characters. Students could see for themselves where one character’s version contradicted another’s and also where their accounts corroborated each other’s perception of the facts. We then looked at three different major newspapers, to see what each had emphasized of world and local events. We also looked at how each paper presented those events. What was the writer’s viewpoint? What were the facts in common among the articles? Where were they in conflict? It was a way of getting kids to think critically about what they read and to think about the author’s hand in shaping the events we take in as readers.

In The False Prince, it’s almost as if Sage’s distrust of people extends to readers, too. Can he trust us with the information he has? As the book progresses, he parcels out more and more of his past, but it’s almost as if we must earn it. This novel is a great, immersive read that will keep kids turning the pages for the sheer adventure and for the ruse that Bevin Conner (their guardian of sorts) is trying to pull off. He claims he has the kingdom’s best interests in mind. Does he? That’s another piece to the mystery. These questions will get kids thinking about who’s behind the curtain, pulling the strings. This reader can’t wait to see where Nielsen takes her characters next.
Posted by twentybyjenny at 6:12 AM 2 comments: 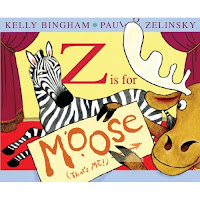 Z Is for Moose by Kelly L. Bingham, illustrated by Paul O. Zelinsky, is such an over-the-top success because it breaks all the rules. Or rather, it breaks just the right rules. The book follows the alphabet, but Moose does not. Zebra tries to keep things going along smoothly, but he cannot—because Moose bucks the system. And when Zebra casts Mouse in the “M” scene, it feels downright mean. But the clever way that Zebra makes it up to Moose teaches us something about both creativity and friendship.

We all know how desperately Moose wants to be a part of the show, and Zelinsky emphasizes this in his brilliant artwork by breaking all the rules of picture book making. Bingham and Zelinsky establish a strict structure, then tear it all down, and play with perspective and the animals' relative sizes. But author and artist also convey an emotional honesty through the breaking of these rules, as Moose invades our space and that of his fellow performers—crossing out words and bursting through the edges of the pages until the stage is utter chaos.

Children, like Moose, are passionate and focused—they just want to participate. And when they are barred from participation, they cannot control their anger and disappointment. It leaks out in all sorts of ways, albeit perhaps not as dramatically as it does for Moose. As a picture book that tests the boundaries of the format while also teaching children their ABCs as well as giving them a way to talk about their feelings, Z Is for Moose is a triumph.
Posted by twentybyjenny at 6:57 AM 4 comments: 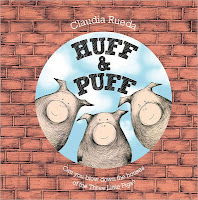 Here’s the genius behind Huff & Puff by Claudia Rueda: The toddler gets to play the big bad wolf.

Forget the iPad (just for a moment). This is what interactive reading is all about. The child gets to discover, by turning the pages, why those holes in the pages seem to be related to the pile of straw or sticks on the next page. And, as the story continues, readers also realize why the three pigs don’t look frightened that a wolf just blew their houses down. The experience of reading aloud together is itself interactive. But add to that a clever activity that’s intrinsic to the story, and you have a truly rewarding and playful interactive experience.

Certain stories almost seem to be known at birth. The Three Little Pigs is one of them. Goldilocks and the Three Bears is another. But there may be no greater refrain than “I’ll huff and I’ll puff and I’ll blow your house down.” A die-cut hole in the middle of the page makes it seem as though the child’s strong “blow” travels through the opening and knocks down the house of straw and sticks (and finally blows out the candles on a birthday cake). Like Press Here, the book’s pages seem to anticipate the child’s actions and “react” to them, which delights the child. When I got to interview Claudia Rueda for Kirkus Reviews, she said, "I wanted the reader to be one of the characters."

I must confess that I did not get the conceit until my third reading of the book (and admitted this to the author), but toddlers get it immediately.  They know they’re the ones blowing the houses down. And they’ll want to do it over and over again.

Posted by twentybyjenny at 6:07 AM No comments: