A Germ of an Idea


Jennifer Niven's character Violet Markey, who had written a successful blog with her sister, Eleanor, summons the courage to start an online magazine of her own called Germ. Niven decided to start an actual magazine by the same name. We talked with her about the relationship between life and art in All the Bright Places.

That opening scene with Theodore Finch and Violet both contemplating suicide from the roof of their high school is both funny and also a nail-biter. How did you decide to start there?

The book is inspired by real-life events. It's a story I've carried around for a long time. I'd just come off a series of books for adults, and I'd just lost my agent. I wanted to write something that really mattered. When I got the idea for the story, I sat down and wrote the first chapter just to see what would happen. I thought, "What would it be like to write from a boy's point of view?" Originally, Violet was not on the ledge; Finch was up there by himself. The first line just came out, and it just kept going.

How did you find the voice for Finch?

I think one of the things that really informed the writing is knowing people--one boy in particular who I was close to--who had struggled with the same thing, bipolar disorder primarily. I have done a lot of research for nonfiction and historical novels. If I hadn't known people who were struggling with this, I don't know that I could have written it the way I did because there's only so much you can learn through research.

I was into revisions on a manuscript and I was thinking, "Wouldn't it be cool to have a real Germ magazine?" I started sketching it out, and flash-forward to now, and we have an all-volunteer staff. There are 45 of us, the age range is between 14 and 40, but the majority  are 14-25, and they're amazing. We have editors and social media people, and a literary section as well. We're getting wonderful submissions from around the world. We handle some of the harder issues, some great writers have written about their experiences with an eating disorder or being bipolar... and then also decorating your locker.

Of the kinds of books you've worked on--fiction and nonfiction for adults, this novel for teens--is there one area that's proven more challenging?

There are challenges with each book and each genre. I will say that it felt very natural to write YA. I lost my ex-boyfriend to suicide a long time ago, and my dad died of cancer during the same calendar year. I was allowed to grieve about my dad, but I couldn't grieve about the boyfriend. Writing this book was really cathartic.

I went to visit a high school and we asked everyone to think about their bright places--your dog, or your mom, or a movie you love, or a book or word you love. We put their bright places on Facebook, and you can go on Twitter and Instagram to see some of the places others have come up with. I'm so grateful for everything that's happening.

This is an excerpt from a longer interview that first appeared in Shelf Awareness for Readers.

Posted by twentybyjenny at 6:06 AM No comments:


The Little Prince by Antoine de Saint-Exupéry is Peter Sís' favorite book. "When I got it from my father, he made a point that it's a special book," Sís told me when I got to interview him for Kirkus Reviews about his book The Pilot and the Little Prince. "It was about secrets." At the time, Sís was a child growing up in Prague under a totalitarian regime, and The Little Prince transported him outside of its walls. "This was a door through which I could go myself," he says. "I could go to another place or another planet."

The Pilot and the Little Prince took Sís a long time to write. "The Galileo (Starry Messenger) and Darwin (The Tree of Life) books happened while this project percolated," says Sís. "With Darwin and Galileo, I wanted to show children that people would be against them, and they'd have to face challenges." On the other hand, Sís says, "Saint-Exupéry is about the poetry." But it's also a history of the airplane. Born in 1900, Saint-Exupéry started flying at the dawn of aviation and, as a pilot, saw dramatic changes in the development of the airplane. The Lockheed P-38 Lightning Antoine flies at the end of the book is almost as advanced as the planes today, according to Sís. He simultaneously captures both the possibilities of science and the poetry of the era in which the author/artist and aviator lived. This duality resonated with Sís, who grew up reading Jules Verne and watching the films of Georges Méliès, among other artists, to whom he gives a nod in the opening spread. 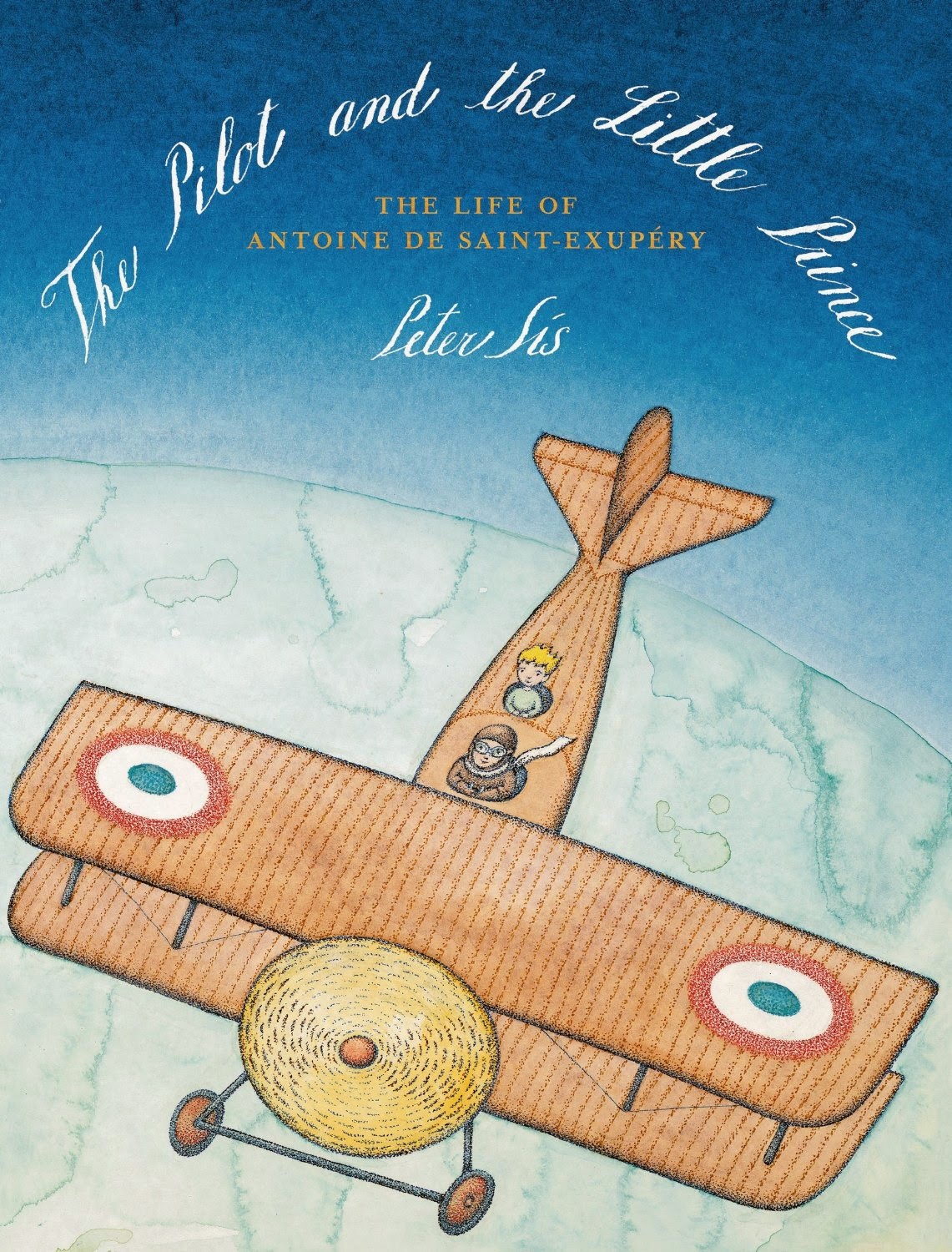 Sís has returned to The Little Prince at different stages in his life. "As a child, I thought, 'Of course, he talks about how we children know it's an elephant in a boa constrictor.' " These are the secrets Saint-Exupéry confides—that children understand what adults do not. “I remember coming to this country, it was a book of hope," Sís continues. "Reading it to my children later, it was more melancholy and sad. Being older, you understand both worlds. Unfortunately, I became the adult."

This is an excerpt from a feature that originally appeared in Kirkus Reviews.


Marla Frazee is not shy about using colors. Just look at All the World (written by Liz Ganlon) and A Couple of Boys Have the Best Week Ever (which she wrote as well as illustrated), both Caldecott Honor books. But in her latest book, The Farmer and the Clown, the absence of words and her sparing use of color highlight the shift a little clown makes in a farmer's life. The clown introduces not only color, but also a new perspective--even a sense of joy--to the farmer's seemingly ceaseless routine.

The colors of the train traveling on the tracks at the edge of the farmer's property telegraph "circus": fun, entertainment, escape from the daily grind. The little treasure the train inadvertently leaves behind ripples through the farmer's world, disrupting his daily rhythms in the best possible way. The farmer, usually dressed in a crisp white shirt and earth-colored pants, wears red pajamas, suggesting he only lets go at day's end. And boy, does that toddler clown give him permission to let go--making faces, juggling eggs, packing a picnic basket.

In the parting images, Frazee lets readers know that the clown has made a lasting impact on the farmer--he will carry the joy he shared with the little clown always.

Posted by twentybyjenny at 5:56 AM No comments:

Labels: A Couple of Boys Have the Best Week Ever, All the World, circus, farming, friendship, Marla Frazee, The Farmer and the Clown, wordless books


The design of Countablock is as enticing as the text by Christopher Franceschelli and the illustrations by Peskimo. Young children can touch each numeral as they count from 1 to 10 (and then by 10s to 100). They can see that 6 and 8 have curves, and that 4 and 7 are angular. They can begin to recognize the numerals on sight, just as they would sight words such as "the" and "and."

At a time when children are learning at their most rapid rate, they can gain a full experience of seeing, touching and sounding out the names of these numbers as well as counting the objects. The book is beautiful to behold, the text stimulates thinking, guessing and problem-solving, and the pages are chunky enough for little hands to grip and turn, over and over again.

Children will appreciate the book's additional layers as their developmental skills widen and deepen. Author and artists (Peskimo is a husband-and-wife illustrator team) pay homage to both the beauty of the natural world (20 caterpillars that transform into 20 butterflies), and humor (with 40 eggs that include 39 of the more common white or beige variety, but also a large green egg that cracks open to reveal a surprise occupant). There is much to savor in these pages.

Posted by twentybyjenny at 6:26 AM No comments: