The Price of Admission

The central paradox of Grave Mercy by Robin LaFevers, is that the thing that gets Ismae Rienne banished from her fellow Bretons (the scar left by the herbwitch’s poison and the “proof” that she was sired by the god of death) is the very thing that gains her admission to her proper tribe.

Ismae discovers, upon reaching the convent of Saint Mortain, that there are many others like her, who have survived death-defying events, and this creates a bond and closeness between her and the others that she has never experienced before. But it also creates within her a tension that’s new to her: the sisters have trained her in poisons and weaponry and “the womanly arts,” but when Ismae is on assignment—alone—she must search her own conscience. Is Gavriel Duval, whom the abbess and Chancellor Crunard suspect of leaking the secrets of Brittany’s inner court to France, truly a traitor? Or is his loyalty to the duchess as unwavering as it seems to Ismae in the days and weeks that she has shadowed him? And what of the others with the “mark” of Saint Mortain? Are they irredeemable? Do they deserve to die?

Ismae is torn between the loyalty she feels toward the sisters in the convent, the only true home she’s ever known, and what she believes for herself when it’s just Ismae and her mark. These kinds of choices serve as metaphors for the defining moments of adolescence, which lead the way to adulthood. It’s about taking responsibility for our choices and living with that responsibility, whatever we deem it, right or wrong, in hindsight. Ismae has come far to gain this sisterhood, but she must travel further—alone—to come to herself.

Posted by twentybyjenny at 7:39 AM No comments:

At one time, author Lissa Evans produced comedy shows. Comedy is all about timing. The humor must be paced exactly right or it loses its oomph. You can see Evans’s exquisite timing play out not only with the humor of her novel but also with scenes of suspense, as you read Horten’s Miraculous Mechanisms, illustrated in black and white by Temujin Doran.

Ten-year-old Stuart Horten must move with his family to his father’s childhood hometown for his mother’s new job. He wonders how he’ll ever meet other kids in the heat of summer. Then he discovers a mystery in his family history—the disappearance of his great-uncle, a legendary magician—and at the same time, a neighbor girl appears and follows 10-year-old Stuart everywhere. Just when he’s feeling like she’s stalking him, Stuart realizes that she is actually three—identical triplets named April, May and June. Their appearance provides comic relief as tensions mount for Stuart—just the way humor can diffuse tensions in a great horror movie.

Later, when a grown-up actually does start shadowing Stuart (he’s not the only one trying to track down Teeny-Tiny Tony Horten), he has April on his side, so it’s not so scary. Stuart is unraveling a serious mystery, but there’s plenty of humor to leaven the proceedings.

When I got to interview Evans recently, I asked her if her background in comedy helped her with the pacing of this novel. She said it did: “A joke has to be exactly right,” Evans continued. “Similarly, with the accuracy of description of suspense, you have to get the phrasing exactly right or it doesn’t do what you want it to do. It’s got to be tight pacing and no flabbiness.” The success of Goosebumps proves that a successful mix of scary and funny will grab even those kids who don’t think of themselves as readers, and fans of mysteries will find much to savor with Horten, too.

Posted by twentybyjenny at 4:36 PM No comments:

Poetry gives us a way to look closely and contemplate deeply things we take for granted. In the Sea by David Elliott, illustrated by Holly Meade, transports us to the ocean’s depths and the seaside that surrounds it. Reading a good poem is like standing before a Georgia O’Keeffe painting. Her rendering of a flower makes us see it as if for the first time.

With a great poem, we hear the music of language and apply it in a new way. Like the sounds of David Elliott’s 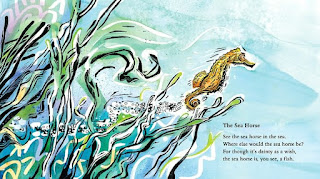 poem “The Sea Horse”: “See the sea horse in the sea./ Where else would the sea horse be?/ For though it’s dainty as a wish,/ The sea horse is, you see, a fish.” In one brief poem, Elliott plays with homonyms (“sea” and “see”), our concept of a horse, alluding to its four-legged mainland counterpart, and also informing us of the sea horse’s delicate beauty (“dainty as a wish”). And who can think of a sea turtle, with its 30-year journey to return to its birthplace as anything other than a “[r]are instrument of nature,/ fair compass in a carapace” after reading Elliott’s ode to “The Sea Turtle”? Some children will ask about the word “carapace,” and those old enough will google it. Because they’ve already gleaned that a good poem is all about the mot juste.

Poetry also lets us grasp the unfathomable, as Elliott helps us do with “The Blue Whale.” The animal’s sheer size, length and heft is hard for adults, let alone children, to wrap their minds around. Elliott’s poem pays tribute to this monumental creature’s presence, not only in its majestic appearance (its “nose an island, a mountain”) but also by its impact through the centuries, as with his mention of how the blue whale “sings a chanty deep and slow/ of winds that rage and storms that blow” and “shipwrecked sailors down below.” He suggests the whale’s strength in battling Mother Nature, outlasting many a human confrontation with the turbulent seas.

It’s a humbling poem and, coming at the close of the book, reminds us of how we fit into nature, that we all inhabit this world together, humans and sea creatures alike. By its brevity and element of surprise, poetry issues a unique invitation to pause and reflect on the extraordinary creatures with which we share the planet.
Posted by twentybyjenny at 8:21 AM No comments: