The hero of Baby Bear by Kadir Nelson is lost and trying to find his way home. Young children may read the book literally; older children (and adults) will recognize the larger journey. Baby Bear does not search in order to be reconciled with his mother or father; he is on a journey that tests his mettle. And he must make it alone.

Never do readers feel that Baby Bear is in peril. Mountain Lion, Moose, Ram and Owl number among those who offer assurance and wisdom to Baby Bear along the way, but he must make his way on his own. Thus, this picture book stands apart from others that feature a solo character who's lost. 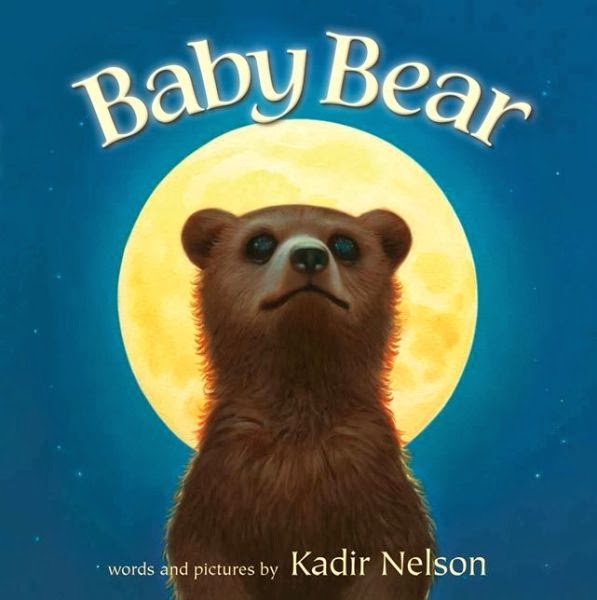 Kadir Nelson revealed in an interview for Kirkus Reviews that one of the most arresting images in the book--Baby Bear's conversation with Owl--had its seeds in Laura Amy Schlitz's 2008 Newbery acceptance speech (for her Good Masters! Sweet Ladies!). "She described encountering this bear in the forest and the moonlight ‘poured into the clearing like a giant bowl of milk,’" he recalled. "It was such a powerful image, so visceral that I couldn't get it out of my head." He didn't yet have the idea for Baby Bear, but he says, "that's the image that inspired the scene of Baby Bear and the owl in the clearing."

After that encounter with Owl, Baby Bear looks up at the moon, and his face commands the entire two-page spread; readers see the moon reflected back in his eyes. We can see there, in that painting, that Baby Bear knows he will be all right. He is filled with the serenity of quiet confidence. And he does indeed find his way home.

Posted by twentybyjenny at 6:57 AM No comments:


Don't judge this board book by its cover! At first glance, the sparkly Shoe-la-la! by Karen Beaumont, illustrated by LeUyen Pham, might seem to reinforce pink-is-for-girls stereotypes and materialistic wishing. On the contrary! The four young friends in this rhyming caper go into a store searching for footwear and come out with a plethora of ideas rather than shoeboxes.

As with all classic dress-up play, the shoes make the costume and the girls take their parts. But it does not turn out the way young children might at first predict. Adults will sympathize with the overworked shoestore salesman, but children will see that the girls just want to have fun. And when they get home, their resourcefulness and creativity make their outfits smash hits. Each of them creates a unique look to suit her personality.

Posted by twentybyjenny at 8:59 PM No comments:


Laurie Halse Anderson draws from her own experience as the daughter of a World War II veteran for The Impossible Knife of Memory, a highly perceptive novel about how PTSD can wreak havoc on intimate relationships.

As with her book Speak, Anderson bears all--feelings, physical responses to those feelings, and complete shutdowns around those feelings. Hayley Kincain has moved around so much she has rarely had to connect with anyone but her father (who ergo has also rarely had to connect with anyone but Hayley). One of the few times she did connect with someone outside the family, her father's girlfriend, Trish, it ended in disaster, with Trish abandoning Hayley and her father. So Hayley has learned to trust no one.

She knows her father loves her, and in his sober stretches, he shows her that he does. But his behavior is inconsistent and confusing, and Hayley frequently steps up to be the adult. So as her new friends in high school gradually establish themselves as trustworthy, Hayley begins to show more confidence and to trust again.

Few authors write more psychologically truthful novels than Anderson does. She is unafraid to expose the most revealing moments of intimacy--whether in friendships, parent-child relationships, or romantic relationships. She shows readers how secrets and shame can isolate one human being from another in the most crippling ways. Yet there is a great deal of repair in her books, always realistically, but enough to offer hope to her readers. Her message is that you do not have to be isolated; you can and will connect with others if you do the work to connect with them.

Posted by twentybyjenny at 6:09 AM No comments:


"My standing lecture for the last year has been called 'Failing Better,'" said Chip Kidd, when we had a chance to interview him about his book Go: A Kidd's Guide to Graphic Design. He stressed the importance of bouncing back from failure, adding, "You have to look at it as an opportunity to do something better. That's very important in design."

Originally, Kidd wanted to be a cartoonist (readers will note the abundance of Batman images in the book), but he didn't believe he was talented enough. So for more than 25 years, Chip Kidd has designed book covers for the Knopf imprint at Random House--books such as Michael Crichton's Jurassic Park, one of the most recognizable covers in the world. He says that Go, his visual guide to graphic design, for kids from 10 to 100, introduces "ideas that I didn't start considering until I was in college."

One of the simplest and most thought-provoking lines in the book is the statement, "Everything that is not made by nature is designed by someone." Kidd explains, "Until you have to try to make some of this stuff, there's a tendency to think that it just sort of happens, or that you don't take into account you have to think of it or do it." Not until someone tries to make something herself or himself can that person understand how challenging it is. He gives some excellent examples of the design challenges he's solved in his TED Talk. 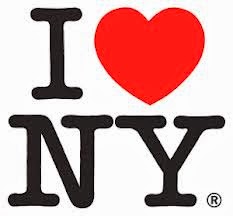 A standout example Kidd uses in Go is a milk carton inspired by nature--its design resembles the markings of a Holstein cow. "It's considering the source of the material and following from there logically," Kidd observed, adding, "That's kind of hilarious." In the book, he includes 10 projects that allow kids to try their hand at graphic design.

He says he wanted to end the book with the inspiration, "Okay, now take this information and contribute to society with it." He believes that the best single example of that is the iconic "I Love New York" image from Milton Glaser.

Posted by twentybyjenny at 8:04 PM No comments:


In his author's note for The Tortoise and the Hare, Jerry Pinkney describes how he took to heart the moral of this tale as a schoolboy, struggling to learn with dyslexia. He also sees its wisdom today, as we move at an ever-faster rate with the aid of technology. "As the pace of our lives continues to speed up, many yearn for a less hurried approach to life," Pinkney observes. "The tortoise proves that it can be wise to have a goal, but one should relish the process of getting there."

Like his Caldecott Medal–winning The Lion and the Mouse, Pinkney thought The Tortoise and the Hare would be wordless, but he wanted the process to be organic. As he considered the moral of the story, he thought, "Wouldn't it be interesting if the moral unfolded on the spreads with the tortoise?" He started working out the dummy and, using the moral as a cumulative text, discovered that it corresponded perfectly with the spreads featuring the tortoise.

The artist described his process at a Society of Illustrators event last month on December 9. He uses marker to draw on vellum, then places the drawing on a light box, and watercolor paper over that. This way, he can keep developing the drawing (in pencil), tracing over the marker, and use watercolors on the final drawing. Pinkney passed around his childhood copy of Aesop's Fables, illustrated by Arthur Rackham, which has inspired several of his most beloved picture books.

Pinkney's entire career is a testament to the rewards of staying one's course. As a boy of 12, in his hometown of Philadelphia, Pinkney sold papers at a corner newsstand--an ideal vantage point for a budding sketch artist. His drawings caught the attention of fellow Philadelphian John Liney, cartoonist on the comic strip Henry. At a time when no one in his family was an artist, the young Pinkney was invited to visit Liney's studio, and the cartoonist introduced him to the concept of "the usefulness of art," as Pinkney put it, in a recent presentation in his publisher's offices.

This past summer in his hometown, June 26 was named Jerry Pinkney Day and kicked off an exhibition of the artist's work. In 158 years of the Philadelphia Museum's history, its exhibition of Pinkney's work was the first devoted to a children's book illustrator. Now that's a winner!

Posted by twentybyjenny at 9:06 PM No comments: