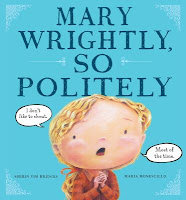 It's challenging to find good books about manners for children. We want a book that's not too preachy, but helpful; instructive without being didactic. Enter Mary Wrightly, So Politely by Shirin Yim Bridges, illus. by Maria Monescillo. Mary is kind and thoughtful, says please and thank you, but when she really wants something, she stands up for herself.

Mary Wrightly is a model for holding onto your confidence while also being courteous. When something matters, you fight for it. Other books mix in humor with light manners lessons. Two others that may well come in handy are: Mind Your Manners, B.B. Wolf by Judy Sierra, illustrated by J. Otto Seibold and Do Unto Otters: A Book about Manners by Laurie Keller.

Here's a pair for slightly younger children (ideal for discussing "personal space"): The Nice Book by David Ezra Stein and Katie Loves the Kittens by John Himmelman. Summer often includes visits to family and friends, and these books can be an entertaining way to polish up the social skills.

Posted by twentybyjenny at 2:05 AM No comments:


As children and teens nationwide wind up the school year, they will leave with summer reading lists of "suggested" titles, possibly even a required number for completion by the time school resumes. But what about the books that give pure pleasure? Let's make sure they have some of those as well. 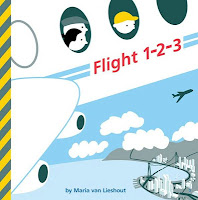 Flight 1-2-3 by Maria van Lieshout makes an ideal travel companion for families planning a trip by plane. High-contrast design elements serve as a legend that unlocks airport signs for luggage carts, elevators and the all-important rest rooms. Kids who like to get a bit more technical will welcome Jet Plane by David Macaulay.

For newly independent readers, the Critter Club series by Callie Barkley, liberally illustrated by Marsha Riti, stars four friends who start an animal rescue in Amy and the Missing Puppy; their adventures continue in All About Ellie and Liz Learns a Lesson. Even 8- to 12-year-olds who don't refer to themselves as "readers" will madly turn the pages of The False Prince by Jennifer A. Nielsen and its sequel, The Runaway King. Four orphans, conscripted by a nefarious member of the royal court, "audition" for a chance to pose as a young prince presumed to have been killed by pirates. In Nobody's Secret, author Michaela MacColl imagines poet Emily Dickinson as a teenage detective solving a murder, and Doll Bones by Holly Black, illustrated by Eliza Wheeler, describes a role-playing game gone awry, with plenty of suspense and gothic overtones.

Gorgeous by Paul Rudnick (which may well find its way into a few adult beach bags) examines a culture of instant commentary and the dilemma of a normal teen who gets a chance to become "the most beautiful woman who has ever lived." Fans of Kristin Cashore's Graceling books will discover heroines just as smart and skillful in Robin LaFevers's novels, Grave Mercy and Dark Triumph. And teens searching for a gripping dystopia, in which an alien presence attempts to hijack the earth, will not be able to put down The 5th Wave by Rick Yancey.

This article originally appeared in Shelf Awareness for Readers.
Posted by twentybyjenny at 7:00 AM 3 comments:


Japanese author and artist Taro Gomi proves the power of simplicity when it comes to board books. Peekaboo! is mostly about encouraging the interplay between parent and child, or grandparent and child, or older sibling and child. The book itself becomes the conduit for a game of peekaboo.

His simplicity is easy to take for granted, yet it shows his mastery for connecting with his audience. He uses an animal or creature's prominent feature to define it. The bulging eyes of a frog set atop its head, the large round ears that dominate a mouse's triangular face. He uses solid colors and rudimentary shapes. The tickle monster is a purple blob ("I like to tickle. I am a monster"), and it looks cuddly rather than creepy because of two baby teeth and a popsicle-pink tongue hanging out. (Gomi uses this same strategy in Mommy! Mommy!: the bright pink comb atop the chicken's head becomes the identifying characteristic that leads the chicks to their mother, who's playing hide-and-seek with them.)

The die-cut holes in Peekaboo! allow adults or older siblings to look out at babies and toddlers through the eyes of the frog, mouse or tickle monster (and then segue into a tickle game, of course). It's such a simple idea, yet so rarely well executed. The design allows a baby to focus on the consistent placement of the eyes, the stated "fact" for each creature ("I like to eat cheese. I am a mouse"), and to "master" the tool of prediction. Bravo!


How sad that the events in Cleveland this week point to the need for a book like Panic by Sharon Draper. In fact Draper, who divides her time between Ohio and Florida, said in a recent interview that Panic was inspired in part by the disappearance of two teenage girls in Ohio who went to buy an ice cream cone from an ice cream truck down the street and did not come home. (They, too, were able to get away from their abductor.)

Draper says we tell our 6-year-olds not to speak to strangers, but rarely do we tell that to our teens. In fact, the three young women who were abducted by Ariel Castro did not know him but got into a car with him. Just like Draper's protagonist, Diamond. Her book reads like a mystery--it's a page-turner--so teens may not realize how much they're learning about human nature in this cautionary tale until they've finished it.

In Panic, a good-looking 40-something man starts talking to Diamond in the Food Court at the mall, as she waits for her friend. He knows a lot about her, says he has a daughter who goes to high school with her, takes a phone call from his daughter in front of Diamond. He says he thought he was supposed to pick up his daughter, but his wife got there first. All attempts to earn her trust.

He tells Diamond, who carries her dance bag with her, that he's holding auditions for a dance part in his film. Diamond's cell phone is nearly out of juice, but she texts her friend to say she's going to an audition and will see her later. Draper paints Diamond as a responsible kid; she gets swept up in the possibility of starring in a film with two of her idols, and pushes aside all common sense.

Adolescence is a tricky time. Teens yearn for independence; they want to try on adult responsibilities. Yet they're on that cusp between childhood and adulthood. They don't yet have the experience to judge whom they can trust and whom they cannot. Diamond trusted the wrong guy.

A subplot in Panic follows Layla, the lead dancer, and Donovan, a big money, big car–driving fellow who's jealous of any time Layla spends away from him. Draper connects between these two men the need for complete control of women. How much is Layla willing to give up to stay with Donovan? It's a slightly different dilemma, yet it's not entirely. How much do you put the trust in someone else at the expense of your own intuition, your own dreams?

Panic is a true conversation starter, a way into some tricky topics, and a good way to explore the fact that there are some people who simply have evil intentions, and we have to be wary. By the end of Draper's book, both Diamond and Layla have realized that part of becoming an adult is taking responsibility for their own welfare. No one can do it for them.
Posted by twentybyjenny at 5:33 AM No comments:


George O'Connor refers to the Olympians--the Greek gods led by Zeus--as "the first superheroes." They may not undergo a Clark Kent–like transformation, but O'Connor portrays them with some very human qualities. Poseidon, for instance, has never quite forgiven Zeus for taking full credit for the demise of their father, Kronos the Titan, "the all-devouring."

The Greek myths have always fascinated me, from elementary school right through my college thesis (on James Joyce's Ulysses; Poseidon hates Odysseus--another name for Ulysses--for blinding his son, the Cyclops called Polyphemos). I thought I knew a great deal about these stories, but O'Connor prompts us to consider them from a number of perspectives. Poseidon is his fifth in the Olympians series.

The author-artist demonstrates the Olympians' difficult childhood (a father who ate them out of fear they'd cause his demise--they caused it anyway) and their infighting due to jealousies both petty and well-founded. My favorite of his retellings thus far may be Hera, because O'Connor brings to light another side of her; she's so often portrayed as the jealous wife overshadowed by Zeus. O'Connor's take on the 10 labors of Heracles (also known as Hercules) posits that Hera's assignment of them strengthened Heracles's character, to complement his physical prowess. However, with Poseidon, O'Connor's use of the comic book format hits a new level, even by the high standards he'd already established with his first four books.

Chiefly, in the series of images that chronicle Poseidon's son Theseus entering the labyrinth to face the Minotaur--O'Connor blows open the confines of the book-as-object. O'Connor divides the pages to emulate the labyrinth itself. The first double-page spread shows Theseus tying the red thread (that will help him find his way back) in the upper left-hand corner, a series of horizontal L-shaped panels track his journey, and his first sighting of the Minotaur appears in a vertical panel at the far right of the spread. A turn of the page reveals the eye of the Minotaur (with Theseus reflected there) in the upper left-hand corner, a series of vertical L-shaped panels depicts their struggle across the double-page spread, and, in a vertical panel in the lower right-hand corner, Theseus reaches for his sword, which he'd dropped in the conflict. The next page shows Theseus's climactic victory. It's an achievement in design, pacing and visual storytelling.

O'Connor takes ancient stories we may think we know well and take for granted, and endows them with immediacy and emotion, proving their relevance today. Triumph, defeat, love, jealousy, strength, weakness, joy and sorrow. It's all here, playing out in well-orchestrated panels and full-spread illustrations. Twelve are planned, but perhaps he'll do more? We can only hope.

The author-artist is not only extremely talented, but generous, too. When I interviewed George O'Connor for School Library Journal's Curriculum Connections, he shared the 5 steps of his creative process, so kids can make their own comics.

Posted by twentybyjenny at 8:03 AM No comments: