In Bluefish by Pat Schmatz, Travis has a complicated relationship with his grandfather, his sole guardian. He’s not excited about the fact that they had to move away from the creek where Travis found some peace of mind, and he misses his hound, Rosco. But it is a chance to start fresh. And to leave behind the nickname his peers had given him: “bluefish.”

The book opens with a good Samaritan act. Travis sees a stray shoe come flying past him while he’s at his locker. Shortly thereafter, a kid ambles by who’s missing one. Travis returns the shoe to the kid without a word and continues on his way. This earns him the respect of Bradley (the one-shoed kid) and also Velveeta, a silent witness. A friendship tenuously takes hold among the three. It’s sealed by a teacher, Mr. McQueen, with a knack for matching the right kid with the right book, and for offering the right comment at the right time. Travis has never known an adult like that, and Velveeta is sorely missing the one adult who had served that role in her life.

With the aid of this friendship and adult guide, both Travis and Velveeta find the courage to confide in one another. There’s a hint of attraction between them, but Schmatz keeps their connection platonic, exploring the full extent of what it means to be a true friend and confidante. Through their friendship, each transforms his and her self-image, and they begin to see in themselves the sense of possibility that they bring out in one another. Schmatz packs an emotional wallop in this brief novel.
Posted by twentybyjenny at 5:57 AM No comments:

A Need to Understand

The Greek gods have fascinated me for as long as I can remember. I loved their power and beauty, but also their weaknesses and petty jealousies, which made them seem more like us. Donna Jo Napoli, in her introduction to her Treasury of Greek Mythology: Classic Stories of Gods, Goddesses, Heroes and Monsters, illustrated by Christina Balit, puts it beautifully: “In reading the myths, we begin to understand that the ancient Greeks must have wanted more than just the big answers from their gods,” she writes. “They must have also wanted their gods to be a reflection that could help them understand themselves.”

Napoli went back to the oldest Greek sources for her myths, Hesiod and Homer. I got to interview her about her research recently, and she set me thinking about just how ancient these myths are. In fact, they’re so much a part of Western civilization that we make certain assumptions—Napoli was not exempt! She and artist Christina Balit had a point of disagreement about the half-bull, half-man Minotaur. Napoli believed that the Minotaur had a human torso on a bull’s body, but when Balit’s illustration of him arrived, she’d portrayed the Minotaur with a human body and a bull’s head. After Napoli went back to substantiate her view, she discovered that the oldest representations in art and sculpture convey the Minotaur as Balit had (you can see Balit's image of the Minotaur here).

It’s such a great example of how important that component is for us as readers, to be able to envision something in our own minds and “make it ours.” It’s why I’m so often disappointed in the movie version of events and characters from books, for which I’d already created my own images. Napoli could find no written reference about which way the Minotaur’s anatomy leans (only descriptions of a “half man, half bull”). The artists who made their ancient paintings and sculptures were the more readily available, with their bull’s head, man’s body depictions. With words alone, we can picture what makes sense to each of us individually as readers, but the job of painters and sculptors is to construct a physical representation of their vision.

For all of us, the seeds of that impulse come from a desire to understand the things we read about or experience in our everyday dealings. Very much like those ancient Greeks, trying to make sense of the events in their lives.
Posted by twentybyjenny at 8:30 AM 2 comments:

One of things I love most about Marla Frazee’s projects is the way she chooses them. “When I read a book to consider illustrating I don't want to fully understand it. I want to puzzle it out,” says Frazee. “I almost want to be afraid of it.” You can see just what she means when you look at her artwork for Stars by Mary Lyn Ray. The text is poetic and lyrical and closely observed, yet it does not include a set group of characters. Frazee found ways to connect the images and build relationships among characters so that you feel an emotional connection to them.

Frazee spoke at the Society of Illustrators in the same presentation as Stephen Savage (which I mentioned last week). She said the text of Stars reminded her of Ruth Krauss’s A Hole Is to Dig, illustrated by Maurice Sendak. Krauss, a former teacher, once said something along the lines of she hoped her students didn’t sue her for lifting their conversations verbatim and recording them in the book. Stars has that same loose, free-associative quality as Krauss’s book.

If you look at Frazee’s illustrations for All the World by Liz Garton Scanlon, and Everywhere Babies by Susan Meyers, the same is true there, too. Frazee creates the narrative through line with her images. We recognize her characters from certain details—pigtails, a slouchy posture, striped onesies, overalls. Although they go unnamed, we feel as if we know them.

Marla Frazee’s Web site, in addition to showing a picture of her studio under an avocado tree (she's sitting on the porch of her studio with Rocket, above), gives all sorts of insights into her work. At the Society of Illustrators, she talked about how she starts with a series of single images. “Sometimes the way into a book is just that--just a way to get started. Like you tend to have polite conversation and then you click,” she said, adding that you have to give yourself permission to make mistakes.

She talked about painting with a tiny brush. It made me look anew at the spread of the yellow sky with its hundreds of dandelion seeds, and the winter scene veiled by snowflakes (“Of course each one had to be unique,” Frazee said with a laugh). Cecilia Yung, art director at Penguin Books for Young Readers, who helped organize the presentation, made this wonderful observation: “The starring character is the sky.” Going back through Stars after that, I thought about the sky’s many moods, and how it envelops the stars in all its incarnations—as celestial body, as the blossom shape that precedes the pumpkin, and as the shiny kind a child keeps in his pocket or gives to a friend to lift her spirits. And that fireworks finale merges the human- and nature-made creative forces into one. Brava!
Posted by twentybyjenny at 7:25 AM 2 comments:

When you are looking at a book with a child who is just starting to grasp the cover of a book in his or her tiny fingers, there is nothing like that “AHA” moment on his or her face. The moment when he or she recognizes the character, or how to turn the page, or skips ahead to see if things will turn out the way he or she thinks it will. That is what happens with Where’s Walrus? by Stephen Savage. There are no words in his book, and babies and toddlers use only their eyes to identify Walrus.

Stephen Savage recently gave a presentation at the Society of Illustrators in New York City, and he talked about how babies pick out Walrus instantly on the cover. After that connection, it makes sense that they would go through each image, searching for Walrus just as the zookeeper searches for his runaway charge. But the author-artist also gives them a hint in the first scene after Walrus’s escape: Walrus is hiding in a fountain across from a mermaid. In this instance, their tails are the same, and also the leafy crowns they wear. Walrus’s tusks differentiate him from the mermaid. In the next scene, the fellow’s tail gives him away. With these first two puzzles, Savage “informs” children that these are the two characteristics that will help them discover Walrus in each image.

In his presentation, Savage talked about the importance of stripping down the images or “essentializing” them. He began with the cover. “Things that are well designed touch the heart and emotion,” he said, “like the Wonder Bread logo. That makes me hungry.” But he also packs in plenty for adult observers, too. The cover is a reference to Edward Hopper’s “Nighthawks.” The zookeeper is a 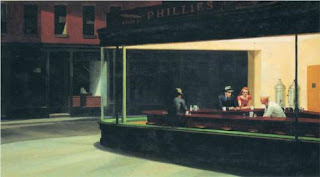 nod to Buster Keaton’s silent films. And can you find the Monopoly man in these pages?

This is a book where your baby or toddler may actually beat your older child (and you) to the punch—finding Walrus before anyone else. Their minds are so attuned to visual cues that this book is tailor-made for them, but the entire family will pore over it.
Posted by twentybyjenny at 7:16 AM No comments: