In Take Me Out to the Yakyu, author-artist Aaron Meshon shows that, at least for the boy narrator's family, baseball is as big a pastime in Japan as it is in America. The game becomes a lens through which we learn about the boy's life, his love of baseball, and the way that it unites the two sides of his family.

Fans of baseball will recognize the title's play on "Take Me Out to the Ball Game," while those new to the sport will be able to figure out the meaning of "Yakyu" from its placement deeper inside the book. Aaron Meshon uses unfamiliar words in a context that allows children to figure them out through a mirror structure. We watch the boy head to the stadium with his American pop pop and to the dome with his Japanese ji ji.

We also see how fans in the two countries show their support (a foam #1 hand in the U.S., a noisemaker in Japan), what they eat in the stadium (hot dogs and peanuts in the stadium, soba noodles and edamame in the dome).  Meshon keeps the structure consistent, so readers always know from which side of the Pacific the boy makes his observations.

Meshon celebrates the commonalities of and the differences between two cultures, and how one baseball-loving boy brings them all together.

Posted by twentybyjenny at 9:44 PM 2 comments:


If you have a baby or toddler in your life, you already know the benefits of board books. You Are My Baby: Farm and Safari by Lorena Siminovich are my idea of the ideal board book. Because they were created as board books from their inception, the author-artist designed and executed them with very youngest children and very smallest hands in mind.

I got to hear renowned pediatrician and literacy advocate Dr. Perri Klass speak at the Bank Street College of Education a few years ago, and she talked about the importance of board books to the training of her pediatric residents. She said that they could learn everything they need to know by watching babies and toddlers handle board books. Do they pick up the board book by the spine? Can they turn the pages (motor skills)? Do they hold the book in its proper orientation (recognizing the images and viewing them right-side up)? Can they focus on what's in front of them?

Author-artist Siminovich presents each animal with one easily identifiable feature (a piglet's "curly, pink tail," a chick's "soft, yellow feathers") and the sound it makes ("Oink! Oink!"; "Peep! Peep!"). She essentially divides the book in two, with the baby animals having their own mini-book within the book. To help children match up the mother with her baby, Siminovich creates a background that serves as a puzzle would, allowing babies and toddlers to complete the picture. And at this age, the attachment to their own mothers is very strong, so the act of matching the cow with her calf, the horse with her foal, is in itself reassuring to babies and toddlers.

As you likely know, I love to extol the virtues of board books' endurance. Children can take them to bed, sleep on them, chew on them, drop them from a high chair, and Mom, Dad or Grandma can throw them in a back pack and keep them in the back seat for a long car ride.

It's so important that youngest children think of books as theirs, to have and to hold, to collect and to keep. And board books can handle their readers' rugged lifestyles.

Why do fairytales endure? Why does a retelling of Cinderella as a cyborg (Cinder) and Little Red Riding Hood as the granddaughter of a spy (Scarlet, both by Marissa Meyer) captivate teen readers? At their simplest and most important level, fairytales are about good triumphing over evil. The darkness (midnight for Cinderella) and the forest (for Little Red Riding Hood, Rapunzel, Hansel and Gretel, and a host of others) bring about a change and a coming of age. Retelling fairytales offers an author the chance to split open an archetype.

We see this for youngest readers in books such as The True Story of the Three Little Pigs by Jon Scieszka, illustrated by Lane Smith; for middle-graders with A Tale Dark and Grimm by Adam Gidwitz; and with Marissa Meyer's Lunar Chronicles for teens. Her heroines from Cinder and Scarlet save their own skins. They don't wait for any prince or woodsman to save them. They assert their own powers of intelligence and plan their own escape routes.

Meyer ups the ante by placing Cinder and Scarlet in a futuristic world where the stakes are higher. It's not just their own futures at risk, but also the future of the planet Earth. Queen Levana plots to take control of the Earth to gain greater control of the galaxy. Yet Meyer keeps readers deeply invested in the characters she creates--Cinder, Emperor Kai, Cinder's android companion Iko, Scarlet, Scarlet's grandmother, Wolf--so that the larger plot never feels over the top. It's a delicate balancing act.

When I got to interview Marissa Meyer, she said that, as the series progresses, we see more of Queen Levana and what makes her tick. Like Cinder's stepmother or Scarlet's Wolf, Queen Levana is not all bad. "That's a goal for me as a writer--to make the villains as real and interesting as the good guys are," Meyer said. We see that with Donna Jo Napoli's portrayal of the witch from Hansel and Gretel in The Magic Circle, and more of what motivates Cinderella in Gail Carson Levine's Ella Enchanted. What Meyer does is create a longer trajectory that integrates several fairytales in one four-book story arc. We can hardly wait until next January for the third installment of her tale.
Posted by twentybyjenny at 7:14 AM No comments:


Gary Paulsen tells us in his author's note for Road Trip that he'd never intended to write a book with his son, Jim. It just evolved organically. Gary Paulsen sent Jim a section he'd written about a father and son rescuing a dog, and his son sent him another section. Collaborative storytelling can be a great ice breaker with kids who don't think of themselves as writers.

We all remember sitting in a circle in the classroom in early elementary school, and the teacher would give us a line to start a story with, and we'd go around the circle and add a line to keep the story going. But writing a story in pairs or in a larger group offers kids a chance to polish, to see which story threads seem to be the most promising. Gary Paulsen acknowledges the crucial role of the editor of Road Trip, who "tied it all together."

Another recent example of excellent collaborative storytelling is Click: One Novel, Ten Authors (authors include Linda Sue Park, Gregory Maguire, Eoin Colfer, Roddy Doyle and Margo Lanagan). Each author's chapter carries the story forward. Then there are strong anthologies on a theme, such as Steampunk!, edited by Kelly Link and Gavin J. Grant, and Jon Scieszka's Guys Read anthologies, Thriller and The Sports Pages. There's even an anthology with a competitive spirit, Zombies vs. Unicorns, edited by Holly Black and Justine Larbalestier (for a true treat, listen to the audiobook edition, in which the ad lib between the editors is even funnier than what Black and Larbalestier wrote in their introductions to each story).

This could be a great way to keep the dark days of winter lit up with ideas.

Posted by twentybyjenny at 6:36 AM No comments:


On Monday, January 28, 2013, at the ALA Midwinter conference in Seattle, Jon Klassen won the 2013 Caldecott Medal for This Is Not My Hat (Candlewick), the second book that he has both written and illustrated. He also received a Caldecott Honor citation for Extra Yarn by Mac Barnett (Balzer + Bray/HarperCollins), a dual honor that was last accomplished by Leonard Weisgard in 1947.

How do your stories evolve?

I've only written two, so it's hard to find a pattern so far. But for the second one, it's not so much a plot as it is a way that the text and pictures contrast. The little fish says, "He probably won't wake up for a long time," and the big fish's eye opens, and you have a book. That page is the idea for the book. It's the structure. Once you have that relationship between the pictures and the book, then you're off. Writing is so intimidating--so's illustrating I guess, but the two have to lean against each other. The more of a job you give each one, the less pressure you have on either one individually.

Tell us about the crab.
The crab is a fun guy. I'm surprised by how evenly divided children are about him. Half of them think he was always a sellout, and half thinks, "No, he's scared." There are a lot of advantages to not narrating. You put the person in the situation, and then you can say, "What do you think about this guy?" When you ask kids about the little fish in this one, even if they're divided about the crab, they're less divided about what happened to the little fish. When you ask, "Do you think the little fish is okay?," there's always one or two hopeful kids. 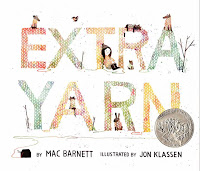 When you spoke at the Horn Book at Simmons Colloquium this past fall, you talked about the illustration in Extra Yarn in which we see evidence of the robbers' theft of the yarn. Could you talk about how you worked that out?
You can't show certain things. With the rules we'd set up, I couldn't see a way to show three men in her room without scaring myself or anyone else. You choose the moment in time when you can imply the most. By showing the moment after, the ladders were still there and the light was on, which meant she'd discovered the theft, and the dog was chasing after them. You can do a lot by implication.

This excerpt of an interview with Jon Klassen was taken from a longer piece for Shelf Awareness Pro.

Posted by twentybyjenny at 5:56 AM No comments: