For a parent, every change in a baby's activities feels giant: holding up one's head, sitting up, and taking a first step. For an older sibling, it's just part of his or her experience. That's what Bob Graham captures so well in The Silver Button.

Life is going on all around Jonathan and his family. Laundry dries on a rack near the blanket where his older sister, Jodie, draws and the dog naps; a woman pushes a stroller outside the window. As Jonathan sways and tilts on his way to his first step, Jodie draws the final silver button on the boot of the duck in her drawing. Jonathan and Jodie's mother is playing on her pipe in the kitchen and misses the whole thing. 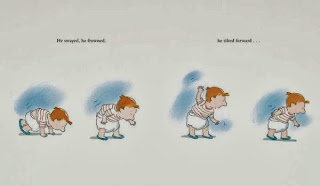 As author and artist Bob Graham moves the perspective farther and farther back, readers see that a baby is born across town, and people are at their desks working. They are completely unaware of this giant milestone in Jonathan's life. Jodie is his witness and alerts her mother, but continues with her drawing.

Yet we know the significance of Jonathan's milestone by the image of his mother's enveloping embrace of her boy and the look on her face--both pride at his accomplishment and sorrow at... what? having missed it? the idea that he's no longer her baby? Graham wisely leaves the mother's thoughts unspoken. This insightful book allows readers of all ages to appreciate life's significant moments and the importance of pausing to honor them.

Posted by twentybyjenny at 6:42 AM No comments:

What Do They Do?


Children who are asked, "What do you want to be when you grow up?" can find out for themselves whether they'd like to be a firefighter, thanks to Mark Teague's Firehouse! Just right for toddlers, this inviting board book gives plenty of information about the inner workings of the fire station and the teamwork involved in the work firefighters do--without the fright of an actual fire.

Teague walks toddlers through the firefighters' routine without the life-or-death stakes. The book is a great way to prepare for a visit to the firehouse or when a child's curiosity is piqued after seeing a fire engine drive past. It answers children's basic questions (What do they wear? Where do they stay?) without raising their fears.
Posted by twentybyjenny at 6:36 AM No comments:

Pieces of a Puzzle


Picture Me Gone came to Meg Rosoff in small pieces, the way the clues to the mystery at the heart of the novel came to her 12-year-old narrator.

First, the author found the name Mila (pronounced MEE-lah). Then, she met a lone dog in the park with a nametag that said Mila. "I don’t believe in extraterrestrial communication," Rosoff told me in an interview, "but I had a little bit of a feeling that someone was telling me to go to work." That dog also gave the author her opening line ("The first Mila was a dog"), and after that, the book was all in her head: "It was a moment of magic that happens sometimes with writing," she said.

Rosoff knew that Mila and her father, Gil, would be trying to find someone--Matthew, Gil's oldest friend--but she wasn't sure why Matthew left. One of the key early clues for Mila is that Susannah, Matthew's wife, seems to be angry with the family dog--Susannah completely ignores Honey. Mila realizes Honey must be Matthew's dog, and what kind of person leaves his dog behind? Rosoff wasn't sure when she began why Susannah would hate Honey, but over time, as she rewrote and rewrote, it became clear to her. "It was like applying thin layers of paint, draft after draft," she said. "Each draft got a little more complex."

The parallel between Mila and Rosoff herself, this process of discovery in solving a mystery and writing a novel, seems too strong to ignore. The creative process is a mystery. In the composition of a novel or a painting or a piece of music, the creator may have an idea of where he or she is going, but the way to get there is often elusive. And on the journey, like Mila, the artist often discovers something about herself in putting together the puzzle.

Posted by twentybyjenny at 6:26 AM No comments:


In The Real Boy by Anne Ursu, Oscar has a talent he does not wish to trumpet. He is very good at mixing healing herbs and potions for his guardian, Master Caleb, "the first magician in a generation." Oscar loves working away in the lab with his many cats for company. He loves gathering the herbs in the magical forest where he can feel the presence of the ancient wizards. He has no interest in accolades; he just wants to know that his remedies work.

But when circumstances change--when the magician must travel and Oscar must come out into the shop and deal with customers who wish to purchase the fruits of his labors--he freezes. Luckily, Callie, an apprentice to a healer with a gift for communicating with others, befriends Oscar. She trades him some coaching on his people skills for his talent for concocting just the right remedies for her patients.

Oscar is the perfect example of so many people--child or adult--whose skill is working alone or with equally focused peers on projects--and then when they are pressured to come out into the world and talk about what they've done, they are terrified, even paralyzed. Such radically different skills are involved. The ability to focus inwardly and give one's full attention to a painting or a novel or a scientific experiment or math formula is one thing, and then to have it be seen by others outside yourself or to feel compelled to show or explain it--how rattling that can be.

The Real Boy, in addition to building suspense and creating a complete world, and turning readers' assumptions on their ears, also allows young people to examine these conflicting impulses--to create something and to just be pleased by its creation--and the implicit pressure to tell the world about it. Master Caleb loves to flaunt, so readers see that contrast between the magician and Oscar. But they will also discover a champion for Oscar in the baker, who finds contentment in nourishing others with his well-made bread, and who looks out for Oscar.

With all the emphasis on Tweeting and posting on Facebook and blogging for all manner of accomplishments--from choosing a good restaurant to winning an accolade--Oscar presents a fascinating contrast as someone who takes his sense of self-worth from a job well done.

Posted by twentybyjenny at 9:59 PM No comments:

Ashley Bryan is a born storyteller. In his latest book, Can't Scare Me!, we can see that the boy narrator is a budding storyteller, and his grandma is a pro. She tells her grandson a tale to help him turn his hubris to humility.

The first time I saw Ashley Bryan at a conference, he performed "Things" by Eloise Greenfield. It's a poem about how, after other things are gone, a poem is something you have forever. Ashley Bryan really does "perform" a text--he inhabits each word. He had "Things" memorized, but he continued to look down at the book in his hands (Honey, I Love), as he explained it, to show children the power of the written word spoken aloud. He wants children to make that connection.

With Can't Scare Me! the boy's grandmother tells him of a two-headed giant and his three-headed brother, who come out after dark. His reply serves as the book's refrain, "Tanto, tanto, I'm wild and I'm free./ Grandma's stories can't scare me./ I'm bold! I'm brave!/ And though I may be small,/ No many-headed giant/ Scares me at all." With the rhymes and the scanning of the lines, the text rolls off the tongue; it's a foolproof text for reading aloud, even for those who are just starting to read aloud to young people.

Bryan's approach to art is as playful as his choice of words. The bright rainbow of colors helps take the fright out of the scary scenarios that the boy confronts. The green and pink faces of the two-headed giant who appears in the boy's path look like masks. Bryan always puts himself in the child's shoes. So as "willful" as the young hero is, we, like his grandma, also delight in his thirst for adventure--his "thrillful" side. In fact, this serves the hero well when the three-headed giant (who comes along next) pops the boy in a sack, because he never gives up trying to escape.

It's a wonderful story about bravery starring a hero who loves to scout new territory and try new things, but who also realizes that sometimes those with more experience (like Grandma) have some helpful guidance to give. Ashley Bryan is a born teacher as well as storyteller.
Posted by twentybyjenny at 6:44 AM No comments: