How Far Have We Evolved When It Comes to Gender Roles?

After I read The Evolution of Calpurnia Tate by Jacqueline Kelly, I started thinking about gender roles at the turn of the 20th century (when the book takes place) and gender roles today, in the 21st century. How far have we evolved? 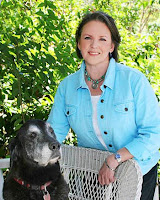 In many ways, we can pat ourselves on the back. Today, women balance family and careers, and men are far more involved in parenting than they were even a generation ago. A boy can embrace his talents in the kitchen and grow up to be a respected chef like Emeril or Charlie Trotter, or a restaurateur like Danny Meyer. A girl can grow up to become a doctor or lawyer--in fact, author Jacqueline Kelly is both (that's her with her dog Elvis).
But when I go into schools, I still see remnants of the ole gender role stereotyping—and the students do it themselves. You know who I mean—girls who insist they’re not good at math, or “don’t get” the scientific concepts they’re learning, or boys who don’t want to admit they’d rather draw than play basketball. It’s my belief that this is not always conscious on the part of children; they tamp down the interests that come naturally to them because they somehow believe it’s “not acceptable” in some way. Callie Vee (the heroine of Evolution) finds not one, but two champions (her oldest brother, Harry, and her grandfather) who stand beside her as she goes against society’s norms. How do we encourage a child’s natural interests? And how do we help celebrate their inborn curiosity?
One of the best pieces of advice I ever received was from my father’s college roommate, Jim Bennett. When I got to college, he told me, “Study what you love, because that is what you’ll do well in.” I resisted becoming an English major because I didn’t know what I’d do with it after college (Ha!) but studying literature and writing was what I loved. And because of Jim’s advice, that’s the course of study I followed, and I’ve never regretted it.
When we hear children belittle their talents or interests, I think we need to stop whatever we’re doing and simply say, “Why would you say that? You’re a wonderful artist!” or “But you’re great at math!” Ask the child to look you in the eye when you say it. Gently repeat it if you need to: “Did you hear what I said? You’re a wonderful artist!” It’s not the big overarching messages we have to address anymore—thankfully, those have mostly been eradicated by society at large. Rather, it’s the small insidious messages that children receive, from who knows where—the playground, a sitcom, an advertisement. Those are the statements we have to stop short whenever and wherever we witness them being internalized by a child. It’s a slow, repetitive process, but the rewards for the child are beyond measure. Sometimes, all a child needs is one champion.
Posted by twentybyjenny at 7:36 AM