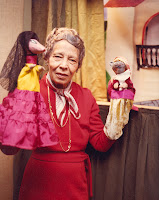 So much of early childhood is about looking for affirmation from others like you, who like the things you do and who literally speak your language. Pura Belpré did so much to help children feel at home with themselves and their world, and to find the stories that helped them see their world reflected back to them. As Pura Belpré did so many years ago, the heroine of My Colors…/Mi Colores speaks directly to the child who’s holding her story, as if to say, this is my world, won’t you join me?
Posted by twentybyjenny at 6:07 AM