Look Out for the Fitzgerald-Trouts by Esta Spalding 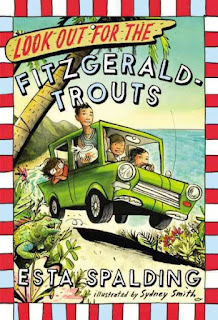 Look Out for the Fitzgerald-Trouts is an adventure of the best kind. Four children live on a tropical island, which wouldn't be so bad except they live in an old green car. They are siblings with multiple mothers and fathers, so they are related in a way that Pippa, the youngest girl, describes by drawing a diagram with a stick in the sand. But when the parents are perfectly horrible, how do the children survive?

Kim, the eldest girl, is well below the driving age, but with a couple of cans of beans duct-taped to her shoes, she can reach the pedals. Constantly making lists of things to take care of, she dreams of finding a home for the Fitzgerald-Trout children. Kimo, the oldest boy, but younger than Kim by a few months, is the peacemaker, and dreams of reuniting with his father, who is lost at sea. Pippa is a ferocious little creature, with big glasses and an even bigger heart. Toby, the youngest, doesn't say much, but when he does, he is very serious. He is also the owner of a goldfish in a bowl of water, which creates some problems when the children drive around the island because water sloshes out of the bowl.


When the car becomes too small for all four children, what will they do? Where will they go? For fans of The Boxcar Children, or even The Swiss Family Robinson, Look Out for the Fitzgerald-Trouts is a fun, hilarious, and heartwarming story perfect for this summer.


Original to The Clarion Ledger.
Posted by Unknown at 6:30 AM