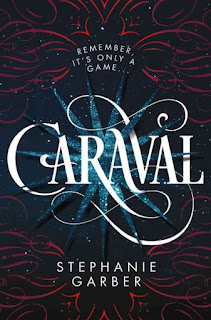 “It took seven years to get the letter right.”


This is the first line of Carval, the enchanting and mysterious Y.A. novel written by Stephanie Garber.


Every year for seven years, Scarlett writes a letter to the master of Caraval, Master Legend. She begs him to visit the Isle of Trisda, so that she can give her sister Donatella the best birthday present ever: a ticket to Caraval. Scarlett and Donatella grew up listening to their grandmother’s stories of Caraval. And on the eve of her marriage, Scarlett writes one last letter to Master Legend, telling him she’s given up, and that it will be the last letter she writes. And in return, she receives tickets to attend Caraval with her sister and her fiance, a man she has never met.
Caraval is both spectacle and dangerous game. Nothing is as it seems in the world of Caraval, and nobody is to be trusted. Scarlett has decided that going to Caraval is too much of a risk, and would ruin her chances of escaping a brutal father. So her sister arranges for Scarlett to be kidnapped, with the promise that she will be returned before her wedding in ten days time. When Scarlett arrives at Caraval, she learns that this year’s game at Caraval is to find Donatella, who has gone missing.


Luscious description, funny and vibrant characters, and a mystery at every turn, readers will find themselves sucked into the world of Caraval that Garber has created. For fans of The Night Circus, readers will not be able to put Caraval down.