A Torch Against The Night by Sabaa Tahir 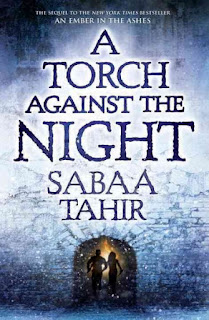 The last we saw of Laia and Elias in An Ember in the Ashes, they were fleeing Blackcliff and the city of Serra through a network of tunnels. To say this was a cliffhanger would be an understatement. Tahir creates an equally as impressive follow-up novel to her debut, delving deep into the world of the Empire.


Elias and Laia might have escaped the walls of the city, but that does not mean they are not free from peril. Elias’ mother, the Commandant, has poisoned Elias, making the journey difficult as the poison slowly takes Elias prisoner. Emperor Marcus is out for their blood, and he has decided to use his most lethal weapon against Laia and Elias: Helene.


Laia is determined to break into Kauf, a maximum security prison, where the Warden of Kauf sadistically tortures his prisoners. There, she hopes to find her brother, Darin, the Scholars’ only hope. Tahir continues the first person narrative that alternates between Laia and Elias, but also includes Helene. The reader gets a glimpse into Helene’s fascinating story as Blood Shrike, one that shows her own struggle to complete the mission Marcus has assigned her, but knowing that whether she succeeds or doesn’t succeed, the lives of her family and dearest friend are at risk.


Tahir’s writing is elegant, spellbinding, and her second novel is a beautiful companion to An Ember in the Ashes. New characters, dark and magical forces at work, internal struggles, and a rescue mission, there is the reminder throughout the entire book that, “So long as you fight the darkness, you stand in the light.”

Labels: A Torch Against The Night, An Ember in the Ashes, New Review: Teens, Sabaa Tahir, teen book recommendations, teens, YA, Young Adult