One Act of Kindness

Yesterday I was talking with a school librarian friend in her office when a third grade teacher came by requesting a picture book about “inclusion.” It’s only the third week of school, and already a group of children were attempting to exclude other children. I kept thinking about how early that impulse starts. And also about how just the right book can get a terrific conversation going among children.

One by Kathryn Otoshi is a great conversation-starter. Not only does Otoshi explore the idea of bullying for very young children, she also reveals how bullies gain power. It’s not by brute force; it’s by subtle acts of cruelty that chip away at a child’s (or adult’s) self-esteem. Red, the bully, continues to insult Blue until he shrinks down to nearly nothing. The bystanders in this book (the other characters—Yellow, Green, Purple, Orange) become complicit in Red’s rise to power because they are silent. They do not stand up for Blue. How many atrocities can we attribute to this turn of events?

But Otoshi gives children a powerful truth: It only takes One. How much sweeping change has come from one person joining with another to take on the people of power? The conductors on the Underground Railroad, women laborers who went on strike after the Triangle Waist Factory fire, the families all over Europe who hid Jews during the Holocaust, the young people who staged sit-ins during the Civil Rights Movement. History is full of examples of brave people often acting alone with their own conscience.

Even for young children, one act of kindness can make a difference: sitting next to a child who's alone at the lunch table, inviting someone to join a game at recess, showing the ropes to a new student, opening the door for someone whose hands are full. That third-grade teacher was onto something. What a great way to begin the school year, to think about all the ways we can make each other feel included.
Posted by twentybyjenny at 7:31 AM 3 comments:

Taking in the Details

Alison Jay in her book 1 2 3: A Child’s First Counting Book encourages children to really look at things. With all of the details she includes in her pictures, she asks them to examine each scene carefully. What’s going on in that picture of the three bears? How does that connect to other images in the book that come before and after it? At the same time, she challenges them to draw upon their experiences, what they know already about the three bears, Cinderella, Jack and the Beanstalk. They begin to feel that they already know so much, because the clues they find in front of them connect to a larger body of knowledge they’ve been building all along.
In my interview with Kate DiCamillo, in which she discussed her latest book, The Magician’s Elephant, she talked about art as a way of looking at our world closely. I’ve been thinking about that a lot as the first signs of fall have set in--the shorter days, the crisper temperatures, the quicker step in the already purposeful pace of my fellow New Yorkers. Yesterday I found myself in midtown Manhattan with an hour between appointments. So I walked to the Museum of Modern Art on West 53rd Street and up the stairs to the second floor where an intimate collection of Claude Monet’s Water Lilies are on exhibit. I say “intimate” because there are less than a dozen paintings, and yet I felt enveloped by them (which was Monet’s wish with his larger “decorations,” according to one caption). At various points in the room, I felt as if I were standing on Monet’s Japanese footbridge, or coming upon the pond at the heart of his garden in Giverny. 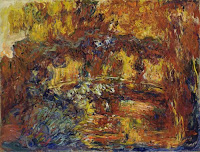 The paintings in this exhibit were all created toward the end of Monet’s life, and in one I’d never seen, he painted a fiery rendering of the Japanese Footbridge (1920-1922) in mad brushstrokes that look more like pastels than oils, so forcefully and spontaneously is the paint applied. I wondered if he were angry when he did it – almost like it was too soon for autumn to arrive and to have to say goodbye to his garden. Was I projecting?
It is an amazing experience, to be enveloped by art, to be so deep in a story that we feel as if we know the characters, to be taken in by a piece of music until it becomes the soundtrack to an episode in our own lives, to be so completely surrounded by a painting that it transports us to another place and time. And I was, in that moment, standing in Monet’s garden in Giverny, watching my parents cross the Japanese footbridge a decade ago, watching the way the sun and clouds reflected back in that pond. I was inhabiting both past and present, mindful of the person I am because of where I’ve been. And I also felt connected to the here and now, to the strangers in the room beside me, each of us sharing this experience, yet having our own private and unique response to the beauty around us.
Children are so awake to the world, so naturally curious and observant. It seems to me that the greatest gift we can give to them—and to each other—is to encourage that wakefulness, that appreciation, that curiosity about the people and places on this planet of ours.
Posted by twentybyjenny at 7:57 AM 2 comments:

Do you remember when we were growing up, and at the beginning of each school year, the (usually) well-intentioned teacher would ask us to write about our summer vacations? Well, what if he or she instead asked for a six-word summation of the summer? Just imagine how creative we’d have been.

Ever since my interview with Larry Smith and Rachel Fershleiser from SMITH magazine about their book I Can’t Keep My Own Secrets, I have become, well, obsessed with six-word phrases that sum up a situation. (SMITH is an online writing community; founder Larry Smith was inspired by the legend that Ernest Hemingway once wrote a six-word short story, and challenged his community members to write six-word memoirs.) On SMITH’s Web site, they showcase a New Jersey teacher, Mrs. Nelson, and her class of third graders who created a book of extraordinary reflections captured in half a dozen words. Mrs. Nelson and her students have proven that children of all ages can stretch themselves while also having a lot of fun with these six-word puzzles.

Last month, I was visiting my friend Joanne and her two daughters, ages seven and 12. After I explained to both of them the concept of the six-word memoir, they each had a go of it. One of my favorites penned by the seven-year-old was a description of her grandfather, whom she’d recently visited: “Sleep all day, snore all night.” The 12-year-old, anticipating the start of school, came up with this gem: “Grade system: A, B, and flunk.” Throughout my three-day visit, I would notice long silent pauses from the girls, and glance over to see their fingers going as they counted off how many words were contained in the phrases in their heads.

Joanne urged me to pass on the six-word phrase I coined for the advice I was given my first year in the classroom: “Teachers should not smile before Christmas.” The irony: that advice came from a third-grade teacher with a soft spot for bullies and naughty boys. Every year she inspired them to do their best work, and they often emerged from her classroom as bigger and better people. (As if it were a New Year's resolution, she started smiling each January.) I won’t reveal her identity here. After all, it’s the start of a new school year, and those bullies only have until Christmas to shape up.

1. Be specific. "Homecoming king with a septum ring" says more than just "punk but popular"; "We are banned from Wal-Mart forever"—not just "my family is embarrassing."

2. Be honest. Many of the most interesting memoirs are so raw ("First time hazy. Blame the booze"; "Hung myself. Sister found me. Alive") I'd personally be too chicken to put my name on them.

3. Forget the thesaurus: Choose interesting words, but only ones that come naturally to you.

4. Use your speaking voice: With "Got three sisters and two dads" and "Hair’s pink to piss you off" you can hear them saying it.

5. Experiment with structure. Two three-word sentences. Three two-word sentences. One statement or six separate ones. Repetition can be powerful and punctuation is our friend: "Fat camp makes fat campers fatter"; "Never been drunk. Never been happier."

6. Stop trying so hard. Or "Write carelessly; edit carefully." Throw a million ideas down and then decide. These aren't epic novels or Supreme Court decisions. Just start scribbling and see what catches your eye. In our experience, peoples' first instincts are usually the best.
Posted by twentybyjenny at 1:12 PM 2 comments:

Writing with a “Manageable, Reachable Goal”

As your child heads back to school and begins to get assigned projects, that is a good piece of advice to bear in mind. Whether they are working on a painting, a book report, or an oral presentation they must give in front of the class, they can break down their projects into manageable, reachable goals. They may begin with a sketch, notes taken and page numbers jotted down while reading, and recording themselves on an audio cassette or in front of a video camera.

Linda Sue Park, Katherine Paterson, and Kate DiCamillo have each won the Newbery Medal. They have each written novels. Two pages a day.

Posted by twentybyjenny at 6:50 PM 4 comments:

For those paying very close attention...

I did not send out a newsletter aimed at ages 8-12 today because there is a very important publishing event on Tuesday that I want to fully celebrate.

So, have a great Labor Day weekend, and we'll meet up here (and via newsletter) on Tuesday!
Posted by twentybyjenny at 12:05 PM No comments: