If you and your teen, like me, enjoy an unreliable narrator--one who sees things that he or she does not share with us as readers, or maybe does not see things that we do as readers--then you will not be able to put down Code Name Verity by Elizabeth Wein.

Right away, we know that Verity is smart, savvy and resourceful. And brave, despite the fact that she begins by telling us, “I am a coward.” We also have the distinct feeling that she has the upper hand, at least intellectually, even though she’s being held prisoner by the Nazis and forced to write a confession of her knowledge of Allied codes, landing strips and the like.

This is a hard book to talk about with someone who has not read it because the greatest pleasures of the book come with its many surprises. So let me just say that the joys of the book come through in the details of Verity’s friendship with her closest comrade, Maddie, who served as the pilot when their plane was shot down over France. Recollections of their friendship serve as the framework for Verity’s written confession. As I read about them, I felt as if I were taking refuge in an air raid shelter, where Verity and Maddie first formed their friendship, biking with them as Maddie attempted to teach Verity how to gain a sense of direction, and visiting Verity’s home in a castle with its Lost Boys (orphaned by the war).

It is an all-consuming book. One that makes you simultaneously want to start it over from the beginning so you can see how Wein paved the way for her many revelations, and also to hand it to a friend and tell him or her to read it quickly, so you can talk about it. It’s a great book for you and your teen to be reading at the same time.

But make sure you check in with each other to see what page you’re on, so you don’t give anything away too soon.

New York Giants defensive end Justin Tuck received the annual Impact Award for his foundation, Tuck's R.U.S.H. for Literacy, last Monday. The occasion was the Children’s Book Council Gala to kick off Children’s Book Week. Tuck said that growing up in Kellyton, Ala., as one of seven children, he and his family didn't go many places. "If you want to go somewhere, pick up a book," his mother told him. Tua and the Elephant is just the kind of book Mrs. Tuck was talking about.

The book transports you to Chiang Mai, Thailand. Without ever leaving their chairs, readers enter the world of Tua and the Elephant by R.P. Harris , illus. by Taeeun Yoo, and experience a night market, smell its foods, witness its customs, meet its people, and speak its language. The artwork accentuates both the exotic and the universal elements of growing up in a village where everyone looks out for their “little peanut” (the translation of “Tua”).

Tua’s world grows larger as she searches for a safe haven for the elephant she rescues, and our world expands, too. Taeeun Yoo’s artwork help us picture Tua’s world even more clearly, and the honest emotion Tua expresses is something all children can relate to, no matter how close they stay to or how far they wander from home.

Posted by twentybyjenny at 9:11 PM No comments:

The Art of Reinvention


Let us meditate for a moment on the art of Laura Vaccaro Seeger.  She reinvents the picture book genre, the beginning reader, the alphabet book. She uses die-cut holes to reveal hidden details. In The Hidden Alphabet, in First the Egg, in Green. She makes us take a second look at the things we thought we knew—leaves and trees, sun and moon, snowman and stars. That tree we take for granted was not always there. It took generations to grow. Let us take note of it, she seems to say. Let us stand under its majesty, drink in its shade, rest among its roots.

So let us meditate on the leaves, on the egg, on all the things we miss while going about our daily business. Let us pause and take in the green we take for granted.

Posted by twentybyjenny at 7:02 PM 3 comments: 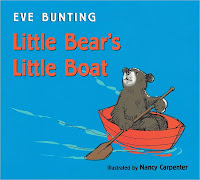 The mother in Little Bear’s Little Boat by Eve Bunting, illustrated by Nancy Carpenter serves as a model of how to instill confidence in her cub. We see Little Bear out in his boat for hours at a time. His mother “calls him in for bed” and he ties up his boat for the night. We see that he’s responsible, and that his mother knows he’s responsible. So she gives him a lot of freedoms. Yet we also sense that she’s always near.

A few pages later, when she sees that Little Bear has outgrown his boat, she affirms his perceptions and offers her knowledge at just the right time: “It is a little bear’s destiny to grow and grow till he is a big bear. It is a little boat’s destiny to stay the same size.” We see the sadness in the cub’s eyes and the comforting hug of his mother. We know that Little Bear listens because he repeats the same words a bit later, when he carries out his course of action.

With Mother’s Day approaching, I’ve been thinking a good deal about the mothers I admire in children’s literature. This book is a small gem. Unlike Peter’s Chair (a book I adore, don't get me wrong), in which Peter is (understandably) upset that his little sister gets his crib and beloved chair, and is still coming to terms with the fact that he must part with the things that no longer serve him, Little Bear sees for himself that he’s outgrown his beloved boat, and he decides what to do about it. His mother validates his feelings and gives him words to describe this rite of passage. But she also gives Little Bear room to take in his new place in the world and decide what he wants to do about it.
Posted by twentybyjenny at 7:28 PM No comments: