Many children go through a phase in which they’re afraid of the dark. The Game of Light by Hervé Tullet may be just the ticket to shed that fear.

Read it first all the way through with the lights on so your child can see the themes the author-artist explores, such as sunlight (“In the daytime, everything is bright”), flowers in bloom, and fish in the sea. Tullet also mentions, “Everything flies around,” and when you shine a light through that page, your child can make out a stick figure hidden among the rectangles (arms and legs) and circle (head), and on the next page, four faces “light up the room.”

So when your youngsters think they see a monster hiding in the shadows, the shining faces and the “everything” that flies around in Tullet’s book can replace those menacing images. If you hold the book up by its front and back covers, they combine to create a continuous panorama of moon and stars.

This book will help your child welcome the dark, replacing shadowy figures that may have frightened them with fish and stars lit by flashlight. With these uplifting images as the last ones they see before they drift off to sleep, they’re nearly guaranteed to have sweet dreams.
Posted by twentybyjenny at 7:54 PM No comments:

Labels: bedtime, fear of the dark, Hervé Tullet, interactive, The Game of Light

An Obsession with Antiquities

Cleopatra’s Moon by Vicky Alvear Shecter plunged me right back into my childhood obsession with all things Egyptian. Where I grew up in Kalamazoo, Michigan, part of the public library building also served as a museum. In it, there was an adult mummy and a baby mummy, and you had to go through a secret passageway to get to them. Every time I went to the library, I visited this exhibit. Nothing ever changed about it, but I had to see it every chance I got. It was like stepping back in time and imagining what the ancient Egyptians’ lives were like, what they saw and wore and did as part of their daily routine.

When I was a teenager, the contents of King Tutankhamun’s tomb went on tour, and our family traveled to Chicago to see it. That cemented my obsession with Egypt. I could get a sense of how King Tut lived from the things he was buried with in death. But Shecter’s research for Cleopatra’s Moon goes further; it brings alive the smells, tastes and textures of the time. She includes the spices they used in cooking and the perfumes and fabrics they wore, the games the royal children played, and Queen Cleopatra’s attitudes of acceptance and tolerance toward people of all classes and faiths. As a ruler, she earned the respect of her people, and Shecter gives us a strong sense of why she deserved it.

And then, with that full and lively setting, Shecter weaves her tale of intrigue anchored entirely in fact—the fight for Egypt among the Roman elite—Marc Antony, Cleopatra’s husband after Julius Caesar, and Octavianus, whom Caesar had named as his successor.

When most of us think of Queen Cleopatra, we likely picture a woman resembling Elizabeth Taylor in all her beauty and sensuality. We rarely (if ever) think of Queen Cleopatra as the mother of four children. But only one of her children survived to adulthood, and that was Cleopatra Selene, forced to leave her beloved Egypt after her mother’s death (by suicide) and go to the home of her enemy, Octavianus, in Rome. How will she keep her brothers safe? Should she pursue an alliance based on love or power? How will she reclaim her homeland? What would her mother have done? These universal questions of adolescence (well maybe not the reclaiming her homeland part) bring Cleopatra Selene’s experiences home to us as readers, even though her circumstances are extraordinary.
Posted by twentybyjenny at 7:11 AM No comments:

A Passion for Collecting

So many wonderful themes come together in Wonderstruck by Brian Selznick, that it’s impossible to touch on them all. Perhaps the theme that speaks most to children, however, is the idea of collecting things. We all did it (and likely still do). Stamps, rocks, shells, dolls, Matchbox cars. Ben Wilson, whose story Selznick tells in words, has a box with a wolf on it, in which he keeps the things he collects. Rose Kincaid, whose story unfolds in images, looks out of the window of her house in Hoboken and creates and arranges miniature models of the buildings across the Hudson River. They are both collectors. Their paths lead them both to the American Museum of Natural History in New York, one of the greatest collections in the world.

o hear Brian Selznick talk about his work on Wonderstruck earlier this week, and he said that several books for children had influenced him. One is Pam Conrad’s My Daniel, about a brother and sister who discover dinosaur fossils near their farm in Nebraska, and their dinosaur makes it to the American Museum of Natural History. Another is Conrad’s book Call Me Ahnighito, told from the point of view of the meteorite that’s discovered on the North Pole in 1897 and now resides in that same museum—and Ahnighito figures prominently in Ben and Rose’s story in Wonderstruck. 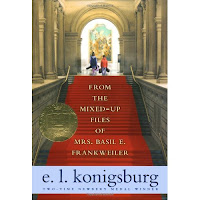 And of course, Selznick said, you can’t write a book set in a museum without paying homage to From the Mixed-Up Files of Mrs. Basil E. Frankweiler by Elaine (E.L.) Konigsburg. He does that several times in his book, including the fact that he named Ben Wilson’s mother Elaine.

One of Selznick’s favorite books as a child was The Borrowers. The Clock family—Pod, Homily, and their daughter Arrietty—“collected” things from “human beans” and repurposed everyday house

hold objects into clothes and furniture. As a child, Brian also loved to collect tiny things, he says. One of the best moments, early in Selznick's novel, is when Ben finds a book called “Wonderstruck” that gives him a name for what he loves to do: curator. “In a way, anyone who collects things in the privacy of his own home is a curator,” the book says.

There’s a picture book I adore that also captures this passion for collecting. In Ben’s story there’s a “cabinet of wonders.” In Sergio Ruzzier’s picture book, it’s The Room of Wonders. “Pius Pelosi was a pack rat, a 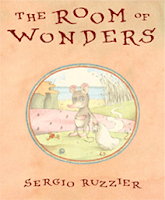 nd he collected things,” the story begins. Pius finds a pebble he loves and his collection expands from there. He creates a compartment for each of the objects he selects, and visitors travel from everywhere to see his room of wonders and hear his stories.

Brian Selznick says that the impulse to collect and organize things is part of being human. To curate is to organize, and that helps us make sense of our world. He believes that is why we love museums, because they allow us to see where and how we fit into the world. And that feeling of knowing we are part of something much larger fills us with wonder.
Posted by twentybyjenny at 6:27 AM 2 comments: 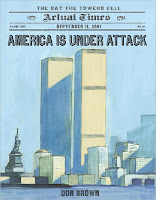 As the 10th anniversary of September 11, 2001, approaches, our thoughts turn to how we may prepare children for the images they'll be seeing. Many children were either too young to process what was happening at the time or were not yet born. Pictures and accounts from that day may be confusing to them. America Is Under Attack: September 11, 2001: The Day the Towers Fell by Don Brown does a terrific job of reporting the day's larger events and also telling the stories of several individuals, to put human faces on the staggering number of people affected.

These four picture books allow children to enter the story where they can make sense of it, and leave behind the details they cannot or do not wish to process. 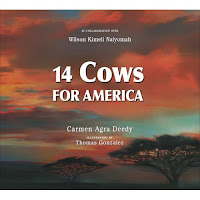 14 Cows for America by Carmen Agra Deedy, illustrated by Thomas Gonzalez (Peachtree). Accompanied by glorious images of the Kenyan landscape, Deedy tells the true story of a Maasai tribe member who was attending medical school in the U.S. when the planes hit on 9/11. He returns to his village to ask his tribal elders if he can dedicate his sacred cow to America, to heal them from their great sorrow. The tribe is so moved by his story that they dedicate 13 additional cows for America. The book is ideal for youngest children because the storyteller must help his fellow villagers understand the magnitude of the event ("Smoke and dust so thick they can block out the sun," he tells them), and also because of its healing message. 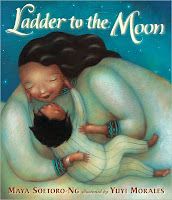 der to the Moon by Maya Soetoro-Ng (sister of President Obama), illustrated by Yuyi Morales (Candlewick) also takes more of a symbolic approach to 9/11, as a girl and her grandmother reach down to children on earth who are in peril and invite them up to safety with them on the moon. Author and artist together create abstract images of a tsunami, 9/11 and war, and focus on themes of love and security.

The Man Who Walked Between

the Towers (Roaring Brook Press) is Mordicai Gerstein's 2004 Caldecott Medal-winning picture book about Philippe Petit's amazing tightrope walk between the World Trade Center towers in 1974. Gerstein pays tribute to the architectural feat of the towers as well as Petit's accomplishment.

Fireboat: The Heroic Adventures of the John J. Harvey (Penguin/Puffin) by Maira K 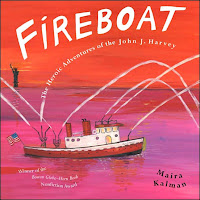 alman pays tribute to the John J. Harvey, a fireboat that came out of retirement to aid New Yorkers on September 11, 2001. The fireboat’s story begins at its launch in 1931, during Manhattan's glory days, when the Empire State Building and George Washington Bridge were going up and Babe Ruth hit his 611th home run. But as the piers start to close, the fireboat's days dwindle, until a group of friends rescue the boat, and the John J. Harvey in turn proves itself the little fireboat that could for New Yorkers in need on their darkest day.

This piece originally appeared in Shelf Awareness.
Posted by twentybyjenny at 6:22 PM No comments: