A Slice of Mad Courage: The Royal Rabbits of London 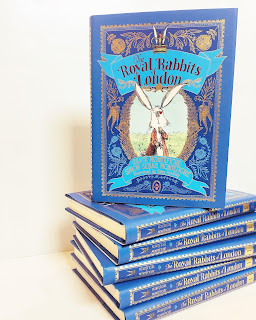 The Royal Rabbits of London by Santa Montefiore and Simon Sebag Montefiore is a new chapter book perfect for children ages 5 to 9 that feels fresh and original, yet follows in the footsteps of The Wind in the Willows and Watership Down with strong animal characters, funny dialogue, and an intriguing plot. Originally published in the U.K., this story begins when a young rabbit named Shylo goes to visit the grizzled, battle scarred Horatio, an elderly rabbit with half an ear. Shylo enjoys these visits because Horatio tells him stories of the Great Rabbit Empire. When Horatio asks Shylo if he remembers the oath made by rabbits long ago to protect the Royal Family, Shylo eagerly recounts the tale of how King Arthur wanted to declare rabbit pie as the favorite meal of the kingdom, but his nephew Prince Mordred loved rabbits. And so...

“King Arthur was a wise king who loved [his nephew] Mordred dearly, so, after a little thought, he declared that cottage pie should be the favorite dish instead. Thousands of rabbits’ lives were saved and cottage pie did become the preferred meal of the British people. The cleverest and bravest of all the rabbits wanted to thank Prince Mordred and so they took an oath to serve the Royal Family of England. They built a warren beneath the castle in Camelot and called themselves the Rabbits of the Round Table.”

“At the very moment that King Arthur freed the rabbits from the Curse of the Rabbit Pie, something magical happened, didn’t it, Shylo?” said Horatio. “Children and only children were given the ability to see those very special rabbits. But it is a gift that lasts only through childhood. As soon as they grow up, they lose that magic and see just ordinary rabbits, like everyone else.”

Shylo loves hearing stories of the fabled Royal Rabbits of London, and Horatio always listens to him. Shylo is the runt of the litter and wears an eyepatch over his weak eye. His brothers and sisters tease him, but it is Shylo who tumbles into a secret meeting of Ratzis (Rats who are plotting evil deeds against the Queen of England), and as it turns out, The Royal Rabbits of London still exists, after all. Horatio sends young Shylo on a quest all the way to London to Royal Rabbits Headquarters--under Buckingham Palace.

With black and white pen-and-ink illustrations by Kate Hindley throughout, young readers and parents will enjoy following Shylo in a tale filled with a secret society of Royal Rabbits, acts of bravery, and close calls with evil rats. As Horatio says to Shylo, “Life is an adventure. Anything in the world is possible--by will and by luck, with a moist carrot, a wet nose, and a slice of mad courage!”