When Alice Hoffman spoke with us about Nightbird recently in an interview for SLJ's Curriculum Connections, she talked about its origins as a story about the isolation that comes from secrets. For Twig Fowler, that secret involves a family curse that has rendered her older brother half-human, half-bird.

Q: Nightbird shares a melding of magic and realism that’s present in your books for young adults, Green Angel and Aquamarine, and your adult novels. What is it about that combination that compels you as a writer?

Alice Hoffman: My childhood reading was fairy tales, and even though they were magical, they felt the most real. In terms of what was happening emotionally and psychologically, even if the story was about a beast or a rose that wouldn’t die, there were truths there. That the magical and the real exist side by side makes sense to me. I always think of myself as a 12-year-old reader…[and] write the book that I want to read.

Q: Where did the idea of Nightbird come from?
AH: This story is about the isolation that comes from secrets. I think many kids know about family secrets, and they know they’re not supposed to discuss them.

Q: What was the inspiration of James’s curse? I thought of the Minotaur—because of his birthright, he’s confined to this half-man, half-creature body. It’s that idea of the sins of the father visited upon the son, isn’t it?
AH: The idea of a family curse, especially one that isn’t talked about, is ancient, whether from father to son or mother to daughter. It’s like the secret of the nursery: you know it even when you don’t know it.

Also, the monster in the family is a common mythological situation. Nightbird came to me as the story of a “monster’s” sister—one who knows that her sibling is not a monster. How you appear on the outside isn’t necessarily how you are inside. Kids at this age intrinsically know that.

Q: It appears that Twig’s mother moved to New York to escape the fact that everyone knows everyone’s business.
AH: Yes, but you carry your legacy with you. That’s what happened to her. I thought of this as a mother-daughter book…. It’s about understanding your parent a little bit [better]. You can never know your mother when she was younger. Twig’s mother, too, doesn’t really know Twig.

This is an excerpt from a longer interview first published in SLJ's Curriculum Connections.
Posted by twentybyjenny at 7:26 AM No comments:

An Attitude of Gratitude

In Last Stop on Market Street, Matt de la Peña transforms the differences a child perceives as negatives and turns them into positives -- with a little help from his grandmother.

Where CJ sees the lack of a car, his Nana sees the riches of the bus ride. While he desires an iPod, his Nana enjoys the guitar playing of a fellow passenger. At last Nana's attitude of gratitude washes over her grandson. De la Peña portrays a woman who leads by example. She allows CJ his feelings while also showing him an alternate perspective.

Christian Robinson's cityscape with its bright, solid colors and patterns will capture the interest of his audience. Even on this rainy Sunday morning on Market Street, the surroundings look cheery, as if Nana herself had painted the scenery. She seems to know and greet everyone she meets.

When readers discover the duo's destination (a homeless shelter where Nana volunteers), they--like Nana--will feel the promise of a community coming together and may even be inspired to help.  This uplifting picture book is a guaranteed attitude adjustment. 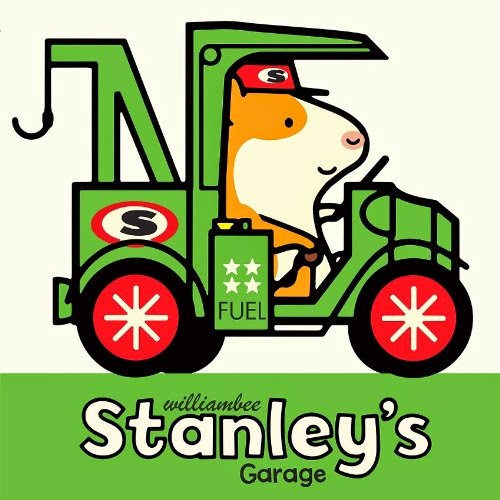 Stanley the hamster is just the right hero to guide toddlers through the inner workings of their world. Stanley's Garage by William Bee is a familiar place--the service station--where Mom gets her tires changed, Dad gets his engine repaired, and the entire family fills up on gas.

Youngest children may not know all the different ways that the team at the garage helps them get where they need to be. William Bee uses different examples of characters with their cars to demonstrate a garage's many resources. He creates a small-town atmosphere where everyone knows everyone else, and builds a feeling of community and trust. People know that when they go to Stanley with a car problem, he will solve it. 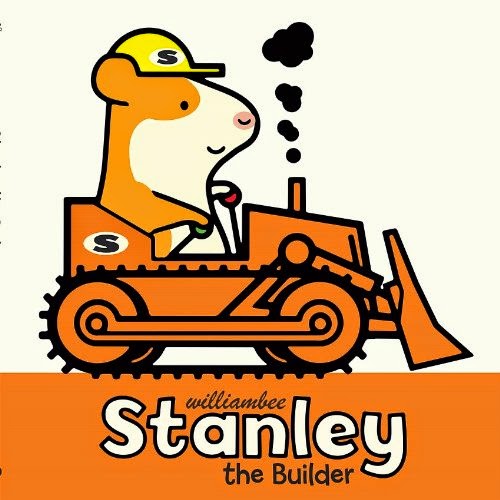 In Stanley the Builder, the hamster hero similarly walks youngest book lovers through the process of constructing Myrtle the mouse's house, using his bulldozer, yellow digger and green crane, plus a little help from his friends.

Posted by twentybyjenny at 8:14 PM No comments: