Princess Cora and the Crocodile by Laura Amy Schlitz, illustrated by Brian Floca 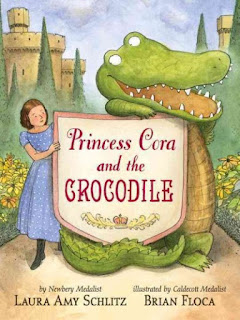 From the moment she was born, Princess Cora’s parents have been training her how to be a Queen. The nanny makes sure that she takes baths so regularly that there is no dirt in sight. Cora’s mother, the Queen, makes sure that Cora studies so that she will be wise. But the books are so boring, Cora finds herself yawning. Her father, the King, makes sure that Cora grows into a strong queen, so he trains her to skip rope. Between the nanny, the Queen, and the King, Cora life is scheduled to the minute and no fun at all. So when Cora thinks that a family dog will help liven things up, she writes to her fairy godmother.
Dear Godmother,
Nobody listens to me. My mother and father won’t let me have a pet and Nanny says I don’t even want one. But I do. And I’m sick and tired of everything.
Please help me.
Love,
Princess Cora


What her Fairy Godmother sends isn't any old golden retriever...Cora gets a crocodile. And since Cora has had enough with the bathing, boring lessons, and rigorous exercise, the Crocodile so kindly offers to dress as Princess Cora for a day...so that the real Cora can have the day off from “Queen training” that she’s always wanted.
Hilarious, fun and charming, Princess Cora and the Crocodile is an early chapter book that makes a wonderful read aloud for the whole family. This is a book that might be read a chapter a night over the course of a week.


Author Laura Amy Schlitz and illustrator Brian Floca are a heavyweight team. Schlitz won a Newbery Award in 2008 for her book, Good Masters! Sweet Ladies! Voices from a Medieval Village, as well as a Newbery Honor in 2013 for her book Splendors and Glooms. Brian Floca won the Caldecott Medal in 2014 for his picture book about trains entitled Locomotive. With Schlitz’s words and Floca’s illustrations, Princess Cora and the Crocodile will become a classic.
Posted by Unknown at 8:27 AM No comments:

Flora and the Chicks A Counting Book by Molly Idle 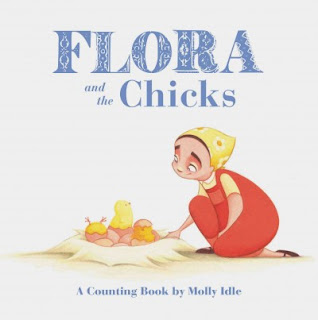 Has spring fever hit? For Flora, it means that her chicks have hatched! When she goes to feed the mother hen, the hen walks off the page...leaving Flora to count the newly hatched chicks! This counting book is full of exciting surprises behind every flap. From 1 to 10, Flora must take care of the little chicks as they hatch, but it gets harder to hold all the chicks in one place! When the 10th chick hatches, the mother hen returns, and all the chicks, and Flora, are happy to see her. Molly Idle’s character, the little girl Flora, has several other wordless picture books, including Flora and the Flamingo, Flora and the Penguins, and Flora and the Peacocks. The illustrations are so expressive that the reader has no trouble understanding Flora’s thoughts. In Flora and the Chicks, Flora will help children learn to count with the help of ten fluffy chicks!

Yvain: The Knight of the Lion by M.T. Anderson, illustrated by Andrea Offerman 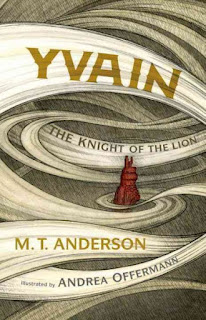 M.T. Anderson’s take on Athurian legend in Yvain: The Knight of the Lion is magnificently illustrated by Andrea Offerman in a most stunning graphic novels. Chrétien de Troyes is the original author of Yvain, le chevalier au lion, written in the 13th century. Most of the stories that readers associate with King Arthur and the Knights of the Round Table stem from the epic poems of Chrétien de Troyes.
Sir Yvain is a knight in King Arthur’s Court, and when Sir Calogrenant returns from the enchanted forest of Brocéliande gravely injured by wounds from a mysterious Red Knight, Yvain quietly leave Arthur’s castle to avenge his cousin, Calogrenant. Yvain, too, pours water over a stone in the enchanted pool in the forest of Brocéliande. Amidst a turbulent swirling storm, the Red Knight emerges to challenge Yvain for disturbing his dukedom. Yvain, defending himself and avenging his cousin, delivers some fatal sword blows to the Red Knight, and he chases the Red Knight on horseback as he rides into his own castle. The Red Knight, it turns out, is the Lord Esclados, and Yvain is now trapped in his enemy’s castle with many who are looking for the man who killed their lord.
The sorceress Lunette takes pity on Yvain, and to hide him from those who would want him dead, turns him invisible. It is while invisible that Yvain falls in love with the Lady Laudine, the widow of Lord Esclados. She is a commanding presence, with fiery red eyes and a mane of red hair. Laudine wishes to avenge the man that killed her husband, but Lunette poses the question of who is the better knight--the one who died or the one who did not? Laudine has to concede that Yvain is the better knight, and since her castle is now unprotected, she must consent to marry Yvain, even though everything shown through the illustrations indicates that it is a marriage of political necessity. 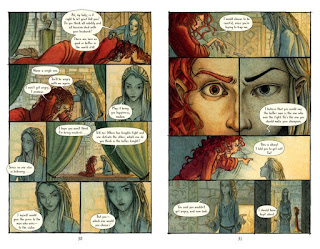 When Gawain, another knight and cousin of Yvain, comes to visit Yvain, he challenges Yvain’s knighthood, saying, “Throw off your harness, old man, spit out your bit, and prove you’re still a warrior, not a dreamer.” Yvain, feeling pressured to prove himself, begs for Laudine to allow him to travel and compete to defend his knighthood. Laudine, disdainful, agrees, saying, “I grant you permission to leave, but there’s a time limit: one year to the day. Understand? If you come back after that, my love will absolutely turn to hatred.”
Yvain sets out to prove his valor among the other bumbling knights. And when he is fool enough to not return in the time limit set by his wife...that’s when things get interesting.
For fans of Arthurian lore and legend, M.T. Anderson’s Yvain: The Knight of the Lion is a masterpiece with Yvain, Laudine, and Lunette as a compelling cast of characters. Offerman’s striking illustrations bring this ancient story into the 21st century, making it appropriate for the modern young reader.

Posted by Unknown at 9:25 AM No comments: