Blooming at the Texas Sunrise Motel by Kimberly Willis Holt 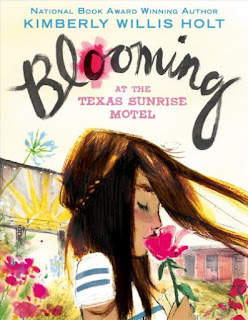 When thirteen-year-old Stevie Grace’s life is uprooted from Taos, New Mexico to live with the grandfather she never knew existed in Little Esther, Texas, she is not happy about landing at the Texas Sunrise Motel. The motel is rundown and the people that live there are charming, if a bit odd. Little by little, Stevie starts to trust the community around her, as they welcome her. There’s Miss Violet, who always wears clothes from the “Lost and Found collection” at the motel, and who loves classic movie marathons. Horace and Ida, both in wheelchairs, are constantly complaining about the broken washing machine and threatening to leave. Arlo and Roy, a father and son who help with the upkeep of the motel, are also among the first to befriend Stevie. Stevie begins to learn who her mother was as a young girl, as she is tutored by the elderly and narcoleptic Mrs. Crump, who also taught Stevie’s mother too. The trouble is, Mrs. Crump falls asleep before Stevie gets to ask her anything! And when Stevie’s aunt invites her to stay in Louisiana, she is torn between living with her father’s sister, or returning to her grandfather and the Texas Sunrise Motel, where a little garden she has planted is starting to bloom.

Kimberly Willis Holt won the National Book Award for her middle grade novel, When Zachary Beaver Comes to Town. Her stories are always filled with humor and heart, and Blooming at the Texas Sunrise Motel for kids 8-12 is no exception.

Posted by Unknown at 7:10 AM No comments:

This House, Once by Deborah Freedman 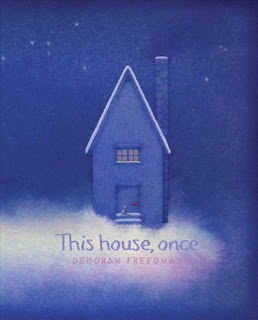 Deborah Freedman, an architect turned picture book writer and illustrator, has written and illustrated a new picture book that takes a poetic look at houses and homes. This House, Once explores all of the elements that go into the history of a house and asks the reader to think, “where do you live, and what was your home, once?”
The house on the cover is drawn page by page, and brick by brick, the illustrations appear. The first lines read: “This door was once a colossal oak tree/about three hugs around/and as high as the blue,” and on the opposite page is a square door with a red doorknob. Turn the page, and that door is now a square in an oak tree. The house, blanketed in snow, has a warm fire that warms the house from within, and the bricks and the stones and the slate are all drawn individually, and then come together to create a beautiful home.
Freedman’s illustrations evoke splashing in the mud, looking up high at the tall oak tree, and sitting cozily in front of a fire during a blizzard. This gorgeous book makes you think about your own history, and how often, what the earth gives us, we need to give back in return.
Posted by Unknown at 9:02 AM No comments: 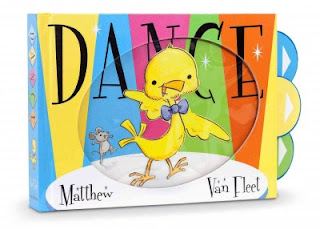 Are you ready to….dance? Shake a tail feather with Matthew Van Fleet’s adorable interactive board book, titled DANCE. The entire premise of the book is that a little newborn chick does not know how to dance, so it is up to the other older and wiser animals to teach him!


From the first page, you’ll be clapping your hands to the beat.


“Hey, Chickie Baby,” said the rhino at the door. “How ‘bout we shake some tail feathers out there on the floor?”
“I’d love to,” said the little Chickie Baby, “but I can’t. I just hatched yesterday and I don’t know how to dance.”


Hula Hippo teaches Chickie how to shake, Bunny teaches the Bouncy Bunny Hop, Gator teaches Chickie the Gator Mashed Potater. There are even tap-dancing pigs! Make all the animals dance by pulling on the tab. By the end of the book, you’ll be shaking, tapping, hopping and bopping around. Get up and DANCE with Matthew Van Fleet’s newest interactive board book. Find the song that accompanies the book at VANFLEETBOOKS.COM
Posted by Unknown at 9:14 AM No comments: