What’s that, you say? A chance to win a WILLY WONKA GOLDEN TICKET?? A trip to New York City or London? A chance for YOUR story idea to be made into a book, written by Adam Gidwitz, author of THE INQUISITOR'S TALE, a play, a movie, a candy, or a minecraft game?? How do you win this elusive ticket? By using your imagination through the Roald Dahl Imaginormous Challenge.  See below for details. 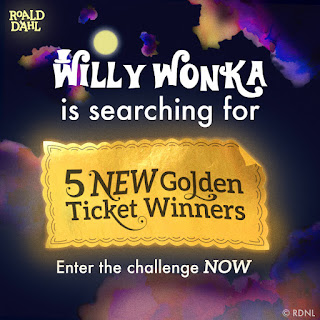 THE DETAILS!
The Roald Dahl Imaginormous Challenge is a golden ticket challenge for kids all over the US!
It's geared towards ages 5-12 and the idea is to get kids to think of a story they would love to write. It doesn’t have to be a complete idea—just the beginning of a story. Kids can submit their ideas (with parental/guardian help and approval) online at: www.imaginormouschallenge.com (Also check out the website for inspirations and ideas!)
They'll be entered to win prizes for their classrooms, a trip to a Broadway showing of Charlie and the Chocolate Factory, or even a trip to London or New York City for them and their family. The key thing to know about timing here is that the contest runs until THE END OF THIS MONTH, May 31st. So get those ticket-winning ideas in ASAP!

**Challenge is for US only, ages 5-12, but anyone can help spread the word/share with the kids in their lives!

**Idea doesn’t have to be a whole story but enough to give a good idea about where the story would go.

**Everyone should check out www.imaginormouschallenge.com for contest rules, examples and resources for parents and teachers.

**Kids can submit as many times as they want, to the various categories.

**There will be FIVE winners chosen—one winner for each of the five categories.

**Children will obviously need adult help entering and resources for adults can be found on the Imaginormous website.

**It’s important to the Roald Dahl Literary Estate that kids of all levels/walks of life are encouraged to enter. The idea will not be judged on spelling or grammar, just the idea itself.

**The challenge is not just for writers/artists—the challenge prizes are for kids interested in music, video games, candy, and more!

**Kids should be encouraged to use post-its (dark blue, light blue and yellow colors encouraged), as well as an easy to create idea book (can be created with a folded piece of printer paper) to come up with ideas and brainstorm.

The Legend of Rock Paper Scissors by Drew Daywalt, pictures by Adam Rex 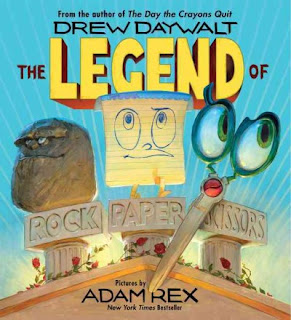 Rock, paper, scissors, go! How many children have settled disputes with a simple round of rock, paper, scissors? Rock beats scissors, but paper beats rock. And scissors can beat paper. It’s a game that teaches that a simple sheet of paper can cover the brute force of rock, but that even paper isn’t invulnerable to the swift slice of scissors. But where did this game originate? Drew Daywalt and Adam Rex have teamed up to give readers the answer in a picture book called The Legend of Rock, Paper, Scissors. It begins “long ago, in an ancient and distant realm called the Kingdom of Backyard,” where a warrior named ROCK looks for a challenger. He battles a clothespin, yelling, “drop that underwear and battle me, you ridiculous wooden clip-man!” Of course, Clothespin is no match for Rock, and Rock is victorious. Next, Rock challenges an apricot, and of course, apricot gets smooshed. Beating these opponents brings Rock no joy, so he journeys on his way.


The point of view switches from Rock to the “Empire of Mom’s Home Office, [where] on a lonely and windswept Desk Mountain, a second great warrior sought the glory of battle. And his name was Paper.” The reader is introduced to paper (a sticky-note with eyes and a nose drawn on him), who is the “smartest warrior” in the land, and like Rock, Paper is also sad that nobody can outwit him. Paper fights computer printer, who cries, “Noooo! Not a Paper Jam!” And Paper battles a half-eaten bag of trail mix in the trash, and no surprise, Paper wins. But, lonely and still undefeated, Paper leaves the Empire of Mom’s Home Office in search of another battle.


Lastly, in the “Kitchen realm in the tiny village of Junk Drawer, there lived a third great warrior. They called her Scissors.” Scissors defeats tape, she climbs up to the freezer and defeats dinosaur-shaped chicken nuggets, and afterwards, she wonders, “Am I so good that not even Dinosaur-Shaped Chicken Nuggets can beat me?”


What will happen when the three warriors meet in the “great cavern of Two-Car Garage”? Will they find happiness in remaining undefeated? I think you know the answer, but, as always, it’s still epic to watch a battle of ROCK! PAPER! SCISSORS! unfold. 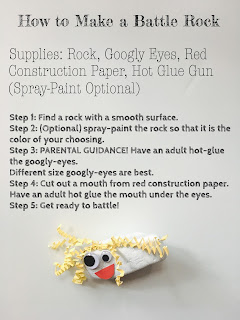 Round by Joyce Sidman, illustrated by Taeeun Yoo 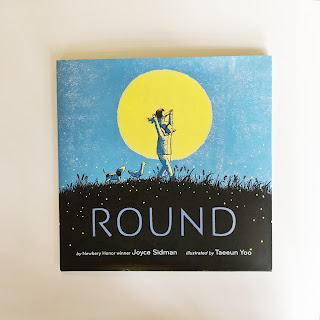 By just glancing at the cover of ROUND by Joyce Sidman, the reader is in for a treat. This picture book is particularly wonderful for small children who may be learning their shapes! In particular, ROUND things. Joyce Sidman is an expert at writing about the natural world in a lyrical way. In addition to the plethora of picture books she has written, her book, Dark Emperor and Other Poems of the Night, was awarded a Newbery Honor Medal in 2011.


This whole book will help children look at the world around them and start thinking about the different shapes in nature. As the reader discovers by following a little girl in green, polka-dotted overalls, there are quite a lot of round things to be found in nature. She notices the roundness of an egg, the swirls on a turtle’s back, the spots on a mushroom, the shape of sunflowers, that are round. One of the most beautiful lines is when the child’s father carries her on his shoulders, and the little girl points at the moon, hanging yellow in the blue sky. The lines read:


“Or show themselves,
night after night,
rounder and rounder,
until the whole sky holds its breath.”


But roundness is not limited to physical objects in the natural world. The little girl discovers that a circle of friends is round, and a hug can be round, too.

Taeeun Yoo’s illustrations go perfectly with Sidman’s words. The bright colors and simple shapes that she chooses to illustrate make this book perfect for a young child. 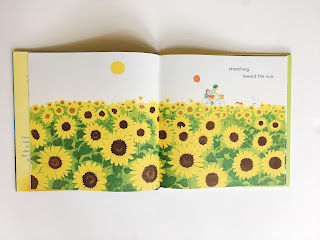