A Board Book to Count On 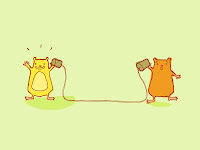 Kass Reich accomplishes a great deal in her first board book, Hamsters Holding Hands. As her rhyming text counts up to 10, she establishes a bond between the furry heroes from the moment there are two. It’s easy to underestimate how challenging it is to get the right balance of words and pictures for children just beginning to make meaning from images and the spoken word.

Her sherbet-colored tones of lemon, lime and orange look good enough to eat, and her hamsters engage in activities every toddler will either recognize or wish to emulate—playing telephone with two tin cans, sharing trucks and balls, a day at the beach with snorkels, popsicles and water wings, under a sun shining like a fried egg in the sky.

With minimal backdrops, she keeps the focus on the friendships between the hamsters and the joy of shared activities. She also leaves a lot unstated, so toddlers can make their own discoveries with each rereading. Here’s hoping this is the first of many books by Kass Reich.
Posted by twentybyjenny at 10:28 PM No comments: