The game of peek-a-boo allows a baby to explore one of the most important concepts in his early experience of the world: object permanence. The book Peek-a-Who? by Nina Laden, builds on this idea by incorporating a guessing game into the peek-a-boo exchange.

According to psychologist Jean Piaget, the concept of object permanence is the beginning of a child’s understanding that objects continue to exist even if the child cannot see, hear or touch them. The game of peek-a-boo plays with this idea because a person hides his or her face from the baby, but the baby can still hear the person’s voice and see that they’re still there.

Peek-a-Who? uses die-cut pages so the baby can see the parent or caregiver through the opening in the page. As they get familiar with the riddles in the book, they see that the black-and-white background belongs to the cow (“Peek a… MOO!”) and the railroad tracks belong to the train (“Peek a… CHOO-CHOO!”). As they begin to sound out the words, they can chant along with the parent or reader. Until such time as they can chime in verbally, they can grasp the thick board book pages with their fingers; the die-cut pages help even the earliest-developing motor skills along.

This is not a new book (it was published in 2000), but it was new to me. A colleague at Chronicle Books pointed out that it was their top-selling board book, so I had to have a look. Now I see why it’s been a success with so many families. It taps into a baby’s every developmental stage—eye contact, motor skills, and, eventually, rhyming sounds and predictability.
Posted by twentybyjenny at 9:34 AM No comments:

Very few things please me as a reader more than an unlikely hero who can win me over.

There’s nothing much to like about Saba, the narrator of Blood Red Road by Moira Young. Not at firs

t. She’s possessive of her twin brother, Lugh. She’s mean to her nine-year-old sister, Emmi. She blames Emmi for the death of their mother and for the light that’s gone out in their father’s eyes. And she doesn’t hide that from Emmi either. You wouldn’t want to have to fight Saba for the last loaf of bread. She’d probably kill you for it.

Yet the fact that she’s so direct, scrappy and winner-take-all makes her a survivor. She can’t read or write, but she remains teachable, as we discover when she meets Mercy, her mother’s friend. Mercy shows her a different point of view, and Saba considers it. She’s not close-minded. And her reluctance to trust serves her well as she moves into the larger world of this post-a

Saba got me thinking about other characters who’ve won me over, or at least, won my sympathies over the course of their stories. Katherine Paterson’s Great Gilly Hopkins is the one that leaps to mind. But books for teens teem with them, too--the best friends and narrators of The Pigman by Paul Zindel; 16-year-old Steve Harmon, the Monster of Walter Dean Myers’s title; the misfit stars of Stoner & Spaz by Ron Koertge; Brent Bishop, protagonist of Paul Fleischman’s Whirligig; and, of course, Katniss from Suzanne Collins’s The Hunger Games. You wouldn’t want to fight her for the last loaf of bread either. 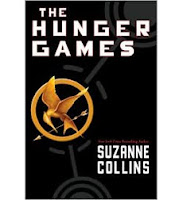 Most of these young people have to experience something dire in order to develop a feeling for others—and, sometimes, compassion for themselves. That foray into testing adulthood, trying out ideas that are contrary to the ones that have been handed down by parents, teachers, and other adult guides, is essential to growing up. Some enter that wider world by choice, others by necessity—like Saba and Katniss. These books allow teens to try on other personas without having to live through their experiences.

Who are some of your favorite unlikely heroes? Which unlikable protagonists wound up winning you over?
Posted by twentybyjenny at 6:10 AM No comments:

It’s hard to think of any author-artist who captures the pains of growing up at the various stages in a child’s life as well as Kevin Henkes does. 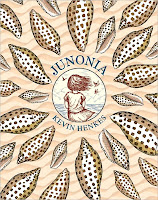 nter vacation to Sanibel Island. She is about to turn 10. That is a big deal. She wants it to be special. She wants to share it with the “family” she has formed in Florida, as she has each February through years of winter retreats. But things are not going according to plan.

Some of the “family” members can’t get there due to weather, others due to conflicts. And Alice’s favorite, Kate, her mother’s college classmate who usually stays with them in their house, is bringing her boyfriend and his 6-year-old child, and they’re staying in their own cottage. It’s as if she’s throwing a birthday party and half the people can’t come, and then her best friend asks if she can bring a friend she’s never met! 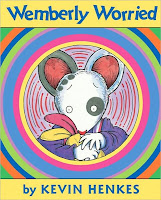 joy. Think of the anxious hero of Wemberly Worried or Lilly’s fit of jealousy when Julius, the Baby of the World moves into her house. And then there are the joys of acquiring a purple plastic purse and the horrors of the teacher kidnapping it for the schoolday in Lilly’s Purple Plastic Purse.

The emotional journeys of Henkes’s characters get subtler as they grow older. Kids feel like they have to be mature about these changes as their birthdays add up, or they feel that their parents expect them to be more mature about worries and new babies and a teacher’s confiscation of your prize possession because you’ve flaunted it a bit too much and a bit too long. “You’re a big boy/girl now.” “Set an example. 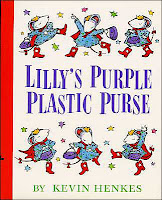 ” “You should know better.” These are the phrases a child hears as he or she gains experience. The expectations others have for them have changed, but the children still feel like children. And they are. Henkes conveys all of those complexities over the course of one spring break as Alice Rice goes from nine to 10 years old.

For a child, sometimes the small shifts can feel like tectonic plates realigning their world. That’s certainly the case for Alice. And with Alice as a companion, children know that if she can survive all these changes, they can, too.
Posted by twentybyjenny at 6:43 AM No comments:

At its core, Say Hello to Zorro! by Carter Goodrich is a heartwarming and funny story about staying open-minded. It stars a dog, but that just makes it easier for a child to laugh (in recognition) from a safe distance. Mister Bud, the hero of Goodrich’s picture book, has been the master of his house. We can tell by the way he meets his owner at the door, and by the way she shapes her day around his needs and his rigid schedule that he rules the roost. So on the day his owner brings home Zorro to meet Mister Bud, he is not pleased—at least, not initially.

Carter Goodrich comes out of a film background. He designs characters (for Finding Nemo and Despicable Me, just to name two). When we had a chance to talk about his work on this book, he said it was important to stay true to a dog’s nature: “They can’t lie. It’s all out there. I think that’s why people like [dogs] so much. It’s not all rosy, but Mister Bud and Zorro accept each other and learn how to cohabitate.” They look different and seem different in every way, except that Mister Bud and Zorro both love schedules! As soon as they embrace this commonality, they make peace.

And isn’t that what siblings do? They unite over the shared experience of living in their family and abiding by or railing against the household rules. Kids at school are attracted to others with common views or interests. This book is very funny because it capitalizes on the quirks of a canine pair that lives to eat and sleep. But in truth, a child adjusting to a new baby in the house, a new kid horning in on his or her best friend, or a new school, is, at the root of it, simply trying to get used to a disruption to his or her routine--a new set of rules, a “new normal.” By showing us how Mister Bud and Zorro make the best of their situation (and even improve upon it), Carter Goodrich shows young people that they can, too. They just have to keep an open mind.
Posted by twentybyjenny at 6:34 AM No comments:

Summer is a time of planned outings with friends, and family vacations. Young children get more out of your excursions if you can prepare them for what they may encounter on their hike in the woods, camping trip or a visit to the zoo. With gorgeous photos and simple fun facts, Baby Animals: In the Jungle by the editors of Kingfisher and the other books in the Baby Animals series can be a great resource. If you can expose children to what they will be seeing, it does two things: 1) It relieves their worries, at least in part, if they know what to expect and 2) they get more out of the experience—before and after.

Once you and your child have been through the book a few times, you can play a game: What’s this animal? What sound does it make? Where would you find them? These kinds of questions help them realize how much they already know, and to get more out of an encounter with the animals they’re about to see. When they get to the zoo, they know to look in the trees for the baby gorilla or orangutan. They know that the orange-hued monkey swinging from the branches is the orangutan, while the burly black primate with the “thick, woolly coat” is a gorilla. The black fur on and around the face of the baby gorilla in the photo will also help your child distinguish between a chimpanzee and a gorilla.

When you come home, read through the book again. This allows your child to review his or her visit to the zoo or hike in the woods (in the case of Baby Animals: In the Forest) and to retain the information he or she has gained through first-hand experience.
Posted by twentybyjenny at 7:15 AM No comments: