Interview Session: Acree Macam and Natalie Nelson, The King of the Birds

This September, Groundwood Books is publishing a story based on Flannery O’Connor’s childhood. One of the most groundbreaking female writers from the South, Flannery O’Connor wrote numerous short stories, essays, and novels that dealt with faith and being a Southerner. In her real life, and as a child, she had an affinity for birds. In addition to teaching a chicken how to walk backwards, she had a special place in her heart for peacocks, which she had for most of her life. A new picture book by Acree Macam and Natalie Nelson, entitled King of the Birds, tells the story of how young Mary Flannery O’Connor mail-ordered peacocks.

“The peafowl arrived by Railway Express from Eustis, Florida, on a mild day in October. When my mother and I arrived at the station, the crate was on the platform and from one end of it protruded a long, royal-blue neck and crested head.”

This account is taken from Flannery’s own essay titled “King of the Birds,” which is one among many essays that were published after her death in 1964 in a collection called Mystery and Manners: Occasional Prose.

Here, I ask both Acree Macam and Natalie Nelson questions about their picture book, The King of the Birds. 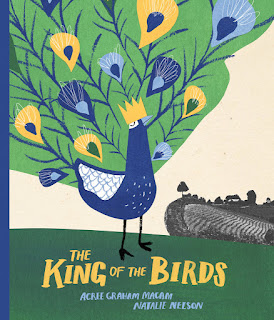 Where are you from? Where do you live now? Do you do anything else in addition to writing/illustrating great books? 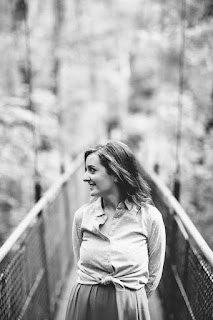 ACREE: I grew up in Raleigh, North Carolina and moved to Atlanta in 2004 for college. I thought I would eventually leave the South but it keeps drawing me deeper in. My day job is working as a copywriter for a messaging firm. We specialize in giving complex businesses a more meaningful answer to the “What do you do?” question.

NATALIE: I grew up in Oklahoma City, and I've been migrating east and south ever since. First I went to college in Arkansas, then I spent three years in Nashville, and now I live in Atlanta, where I've been for the past four years. I like to call myself a “Southerner-By-Choice.” I make illustrations for a bunch of different magazines, newspapers, publications, and books. There are days when I still have to pinch myself because what I do is truly my dream job—I draw pictures for money!

When did you get your start as a writer and/or illustrator? How long have you been writing and illustrating?

ACREE: I won a prize in second grade for a story contest, but other than that I started really getting into writing in high school. I was blessed to have this fantastic composition teacher, Jason Knebel, and if I wrote something he really liked he would give me a “Q” because it felt more special than an A. After that, I majored in Creative Writing at Emory and worked with some incredible professors. I thought I would go back to school and become a novelist, but then I found this thing called copywriting where I could write for businesses and get paid for it. I’m discovering another side of me that is fascinated by the business world and the puzzles it presents.

NATALIE: I've been drawing ever since I could hold a pencil, and I made my own books when I was in elementary school. Being a very shy child, I would spend hours drawing alone because I could just get lost in my own imagination and bring it to life on paper with crayons and markers. I eventually learned I could make friends by drawing pictures and giving them to people, so I guess those friends were some of my first clients.
I've been illustrating professionally for about three years.

ACREE: Oh, gosh, I loved From the Mixed-Up Files of Mrs. Basil E. Frankweiler, the Chronicles of Narnia, anything in the Nancy Drew series, The Giver, Mrs. Frisby and the Rats of NIMH, and of course the Madeleine L’Engle books. I don’t remember much of what I read before age 8 but I’m sure my mom does. Hopefully our readers will have a better memory than I do.

NATALIE: I loved anything by Eric Carle and Ezra Jack Keats, and I still find myself being heavily influenced by their work today. I had a second grade teacher who was a super fan of Tomie dePaola so I grew to love his books too. In later elementary school I was obsessed with the Amelia's Notebook series by Marissa Moss. I wanted to BE Amelia, and began doodling all my journal entries from that point forward.

ACREE: In the picture book world, I love the Mac Barnett and Jon Klassen collaborations. Oliver Jeffers is so imaginative too. And Mo Willems is just hysterically funny. In the adult world, I’ve been following Donna Tartt for the past 10 years or so. I really admire her as a fiction writer. She creates these worlds that I want to disappear inside. Sarah Dessen is also an incredible YA author; I’ve been reading her since I was a young adult. Those are just the living writers. My first loves were Hemingway, F. Scott Fitzgerald, Graham Greene, Walker Percy, Jane Austen and so many others. And I’ve enjoyed Dorothy Sayers’ mysteries as an adult. She was a copywriter too.

NATALIE: Maira Kalman is at the top of my list; she is a genius. Ann and Paul Rand's children's books, Ben Shahn, Eric Carle, Henri Matisse. My favorite author is Flannery O'Connor, no surprise there.

Did you choose to work together on this project?

ACREE: Very much so. The idea for the story came from NATALIE. She was looking for someone who could write the manuscript and my hand shot up into the air.

NATALIE: Yes! This project is so special because ACREE and I truly collaborated every step of the way. We started working on it nearly three years ago during a season of our lives when we both had a little extra time on our hands and were aching to make something meaningful. Once I had the germ of the idea, I knew I wanted ACREE to write it because I knew she'd get it. We had no idea the book would ever become a real thing, but we poured our hearts into it and made something we are really proud of.

Why are you drawn to Flannery O’Connor? The first essay in her book Mystery and Manners: Occasional Prose, is called “King of the Birds.” What do you love most about this Southern author?

ACREE: I do love Flannery O’Connor, but I also fear her. She’s the perfect antidote to the syrupy sweetness of the stereotypical Southern woman and she will always call you on your B.S. I’m not sure what she’ll think of me if we ever meet, but I hope she’s at least cracking a bit of a wry smile our way over The King of the Birds.

NATALIE: I am drawn to Flannery O'Connor for so many reasons, it is hard to name just one. As an artist, I admire her willingness to go to the dark places of humanity and not apologize for it. I also love her sense of humor in the midst of the darkness, and her ability to show that grace is offered to even the most wretched of folks.

What is your favorite Flannery O’Connor story? How has Ms. O’Connor influenced you and your creative process?

ACREE: I read “The King of the Birds” over and over while working on the project and wrote the manuscript with her voice in my head. Hopefully some of her dry wit comes through in the story. I think a lot of people have a one-dimensional view of the South, and she helped capture its (often terrifying) aliveness. A lot of people also have a one-dimensional view of children’s books, so in the spirit of O’Connor, every page of this story works against the predictable and easy. The characters each have full lives beyond the beginning and end of our short book – or at least I hope it seems like they do.

NATALIE: My favorite story of hers is Wise Blood, but her essays and letters are what I can’t stop reading. I love the way she thinks, and hearing her tell the story behind her stories.

Natalie, how did you decide to illustrate this book? Please describe your illustration style and process.

NATALIE: I visited Andalusia, O'Connor's home for the last fourteen years of her life, a few months before we started working on this story. Being on the grounds really brought her essay “The King of the Birds” to life for me, and immediately all the images of the colorful birds started forming in my mind.

For this book, I painted a bunch of papers (with gouache paint) in the colors I wanted to use. Then, I scanned the painted papers into the computer and used Photoshop to cut out the various shapes to create all the characters and scenes. I also sprinkled in some cutouts of found photography, which is something I try to do in all of my work. In the end, I wanted the art to feel both modern and vintage, to tie the story back to the era Flannery really lived in.

ACREE: First, kids are the perfect audience. They don’t hold back emotions. They ask the questions that everyone else feels too dumb to ask. They’re curious and they have a great sense of humor.

Second, writing picture books is a lot like copywriting. You have to leave room for the images to tell half the story. You’re always figuring out how to say the same thing in fewer, simpler words. Anybody can do complexity, but simplicity is a worthwhile challenge.

NATALIE: I love the challenge of making pictures that tell the other half of the story that the words don't convey. I also like creating art for children that doesn't speak down to them but asks them to look harder and wonder more.

What is next? Any future projects for us to look forward to reading?

ACREE: I sure hope so. Any ideas?

NATALIE: I am illustrating another picture book called Uncle Holland, written by JonArno Lawson, and it comes out next spring!

To learn more about Flannery O'Connor, visit www.andalusiafarm.org.
For your amusement, here is a video of Flannery's chicken who could walk backwards!