The Explorers Guild: A Passage to Shambhala, Volume One by Jon Baird, Kevin Costner, Stephen Meyer, illustrated by Rick Ross 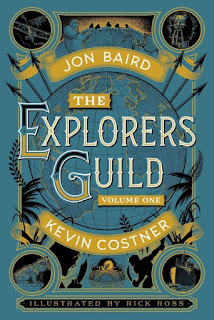 The Explorers Guild: A Passage to Shambhala, Volume One, is an epic tale told in the vein of Rudyard Kipling or Jules Verne, and has the feel of The Adventures of TinTin. In the letter at the beginning of the book, the series curator, E. W. Blake, pens a letter to those who dare to open this first volume.

“Gentle Reader: It is modernity’s boast, of course, that man has mapped and measured, claimed and contested this earth down to its last inch. He has tamed its moods and subdued its monsters, and lit it from end to end with the fires of ingenuity. So we are assured. Yet we who have been canvassing this same earth though the centuries—who have been every place on it that you would care to go, and many more that you would not—we incline to a different view.”

The mission of the Explorers Guild is to find exactly that—the Unknown World, to search solely with the desire to know, from the Latin Cognoscere, to delve into the mysteries from the Arabian desert to the Arctic Poles. This first adventure takes place from 1912-1918, and while the First World War wages, the key players in the Explorers Guild are the Ogden brothers John and Arthur and their sister, Frances. As the title suggests, the adventure, full of fisticuffs, a pack of fierce soldiers loyal to the illusive John Ogden, is to find the hidden Buddhist kingdom of Shambhala.

Scattered throughout, illustrations by Rick Ross bring the golden age of adventure to life. The storytelling is dense and masterful. Teens will discover this book is a treasure trove to get lost in this summer. For those who love Indiana Jones, secret societies, and storytelling at its finest, pick up The Explorers Guild.
Posted by Unknown at 9:20 PM No comments:

The Charmed Children of Rookskill Castle by Janet Fox 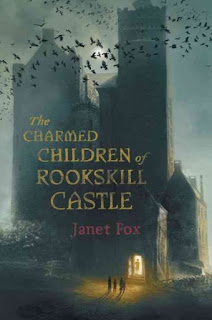 What better way to kick off this summer than by reading a tale about children trapped inside of a haunted Scottish castle?

The children of a British spy, siblings Katherine (Kat), Rob, and Amelie are sent to live and study at Rookskill Castle Children’s Academy far away from London on the Scottish moors during the remainder of the 1940 Blitz. They quickly befriend Peter Williams, an American child living in London, who is also sent to Rookskill Castle.

When the children arrive in the spooky dawn after the long train ride, they are met with the cold countenance of Lady Eleanor Craig, the mistress of the castle. She is clearly hiding something, and rules the boarding school with an iron fist. As the children start disappearing one-by-one, and are being written off as “sick” without further explanation, the doors to their rooms locked, even level-headed Kat starts to think there are supernatural forces at work. It is up to her and her code-cracking skills inherited from her father that she starts to believe the castle is harboring an enemy. The question is whether the enemy is a Nazi spy or a ghost.

The characters of Kat, Rob, Amelie, and Peter are reminiscent of the four Pevensie children from The Chronicles of Narnia. With chapters that alternate between the castle’s shadowy past and present, Janet Fox skillfully brings together myth, history, and haunted castles into a great mystery that will keep the reader guessing until the end.

Review originally appeared in The Clarion Ledger.
Posted by Unknown at 10:44 PM No comments:

Books for the Backseat 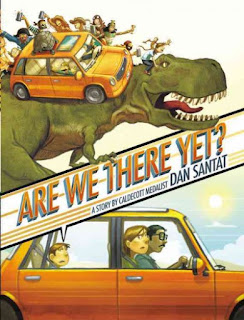 Are We There Yet? by Dan Santat

The refrain is a familiar one. Maybe an hour into the road trip, a voice pipes up from the backseat, asking, “Are we there yet?” This is the refrain uttered throughout Are We There Yet, written and illustrated by Caldecott Medal Winner Dan Santat, author and illustrator of Beekle. A family of three is driving to celebrate Grandma’s birthday. The narrator, a young boy, thinks the trip is taking forever, a familiar feeling for small children.

He says, “The car trip to visit Grandma is always exciting! But after the first hour, it can feel like an eternity.”

Are We There Yet? explores what happens when your brain gets too bored…and apparently, that means time goes backwards! Santat cleverly employs tricks such as turning the book upside down and flipping pages right to left, making the reader travel backwards in time alongside the family in the book. Buckle up and come along for the ride!

Santat ensures that the reader will most definitely NOT be bored as they follow the family in a little orange car back through the stage coach era, to when pirates rule the high seas, even going so far back to see the ancient Egyptians at work. The reader will travel back in time millions of years to when dinosaurs walked the earth. Finally, the little boy thinks, something exciting! And since his brain is no longer bored, the book fast-forwards to October 24, 2059. Oops! Too far into the future—the family has missed the birthday party! When they finally arrive, just in time for the birthday party, there is no better time than the present.

For a fantastic preview of the book click the video below, provided by Little Brown, Books for Young Readers. 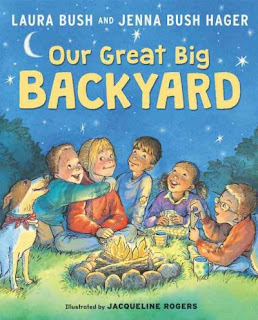 The former First Lady and her daughter have teamed up to write a picture book just in time for summer! In Our Great Big Backyard, Jane can’t wait to play videogames with her friends all summer, but her parents have different plans. Along with her little brother Sam, they’ll be taking the Great American Road Trip. Jane is less than thrilled to be riding in the backseat without any Wi-Fi, but as they travel to more and more parks, Jane starts to notice the amazing sites around her. From the Everglades National Park all the way to Yosemite, Jane has fun with her brother Sam out in the wilderness.

“The mountain went up and up and up, straight into the sky, watching over us. I felt really small but really great, too, like I was part of something big."

When Jane gets home, she realizes that even in her backyard she can see the stars, and invites her friends over for a camp out. Even better, if you and your family are planning a trip this summer, there is a listing of National Parks in the back of the book to help you see what might be in your own backyard.

Original to The Clarion Ledger.
Posted by Unknown at 5:42 AM No comments:

Heads and Tails is a Let’s Step™ Books to Grow On book that encourages active participation in the reading of the book. Peggy Nile’s delightful illustrations reflect those animals drawn by Richard Scarry. A board book, each page is cut out into the shape of an animal. Babies and toddlers will learn different animals by flipping each page, revealing the next animal. From the smallest mouse to the largest elephant, each animal asks, “But who comes next?” Each animal is also associated with a sound, and keywords are highlighted in bold. “Splash! The frog jumps into the water!” 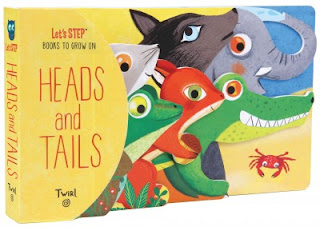 Chronicle’s new imprint, Twirl, contains a plethora of immersive, educational and fun books for babies and toddlers. Heads and Tails is the perfect book for ages 0 to 3 that combines bright colors, animals, and sounds.

Watch the adorable video demonstrating the best way to read Heads and Tails from Chronicle Books.

Posted by Unknown at 8:19 AM No comments: