Melissa Sweet found a kindred spirit when she discovered the work of Tony Sarg. He stars in her picture-book biography, Balloons Over Broadway: The True Story of the Puppeteer of Macy’s Parade. They both design toys, for one thing. And they both need to play in order to do their work.

Melissa Sweet learned about Tony Sarg from her colleague at eeBoo Toys, where she works as a designer. She has often used collage in her artwork, as she did with her Caldecott Honor book A River of Words. But this is the first book in which she uses three-dimensional collage—actually incorporating the materials that Sarg himself would have used, such as dolls, yarn and spools of thread.

One of Melissa Sweet’s three-dimensional collages is currently at the Society of Illustrators (128 East 63rd Street, New York, NY 10065). It’s part of an exhibition of original children’s book artwork (150 pieces in all, from books published in 2011) and will be on display until December 29, 2011. The collages look terrific in the book, but they’re even more impressive in person, where you can see the level of detail, and the care Sweet took in assembling the co 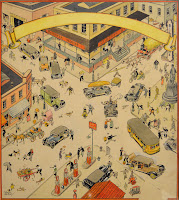 The other extraordinary coincidence is that the Society of Illustrators recently purchased an original illustration by Tony Sarg himself. It’s reprinted here courtesy of the Society of Illustrators, called “Busy intersection in small town,” c. 1928, created in India ink and watercolor. If you want to see just how much Melissa Sweet has in common with Tony Sarg, you can find out more in this interview (and also see some photos of her studio).

If you have a family tradition of watching the Macy’s Parade together, this book will make the experience all the more meaningful.
Posted by twentybyjenny at 6:34 AM