The Night Gardener by The Fan Brothers 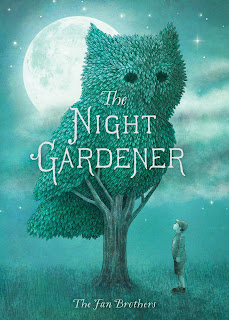 When young William wakes up one morning, something truly magical has happened outside of the Grimloch Orphanage. He is amazed to find that during the night, what was an ordinary tree has been transformed into larger-than-life topiary of an owl! Each day brings a new delight in the form of an animal topiary, including a cat, a rabbit, a parakeet, and more. Something truly incredible is in the night air.

After tree after tree is transformed, William starts to wonder who might be behind the wondrous happenings on Grimloch Lane. One night, he spots someone unfamiliar walking into Grimloch Park, and follows him to find a man with a kind smile and a mustache like a mop, carrying a very tall ladder: “The gentleman turned to William. ‘There are so many trees in this park. I could use a little help.’ It was the Night Gardener!” As an orphan (which is only given away by looking closely at the illustrations) William has found a home in the night, trimming topiaries alongside the Night Gardener.

The illustrations are truly magnificent, a cross between detailed pencil drawings and lush greens and blues—colors that remind the reader of the twilight hour and evoke the mystery behind the Night Gardener and his garden, which is in the public eye. The townspeople gather each day to marvel at what new animal topiary has joined their neighborhood, and young readers will have a fun time poring over all the detail in the illustrations. Eventually, the Night Gardener leaves William a pair of shears, passing on the task of transforming the trees on Grimloch Lane. As the town is transformed, so, too, is William.

The creators of The Night Gardener are brothers who live in Toronto, Eric and Terry Fan. When asked who drew the illustrations and who came up with the story, they say that the book was a complete collaboration between both of them in both words and illustrations. When asked where the inspiration behind the Night Gardener came from, Eric said that the character of the Night Gardener was inspired by their father. He says, “The earliest DNA for the story can probably be traced back to our childhoods. Our dad always had a great love of trees and nature and bonsai, having grown up in the Taiwanese countryside. I think living in Toronto, one of the things he missed most was nature and being outside. I can see now that he tried to balance that love of nature with the cold Canadian winters, and so our house was always filled to the rafters with plants and trees. It was a veritable jungle.”

The Fan Brothers are a new literary team whose collaborative skills are seamless, and whose talent is not to be missed. In The Night Gardener, Grimloch Lane is a place where community comes together, where there is time to “stop and smell the roses.” The Night Gardener reminds us that we should not lose that sense of wonder that children so innately possess.

To learn more about the Fan Brothers in an interview, click here!

Looking for a signed copy of this book? Lemuria has them!

This article originally appeared in The Clarion Ledger.
Posted by Unknown at 7:02 AM