Interview Session: Gilbert Ford, author of The Marvelous Thing That Came From A Spring

Today I’m interviewing GILBERT FORD, the author and illustrator of THE MARVELOUS THING THAT CAME FROM A SPRING: The Accidental Invention of the Toy that Swept the Nation 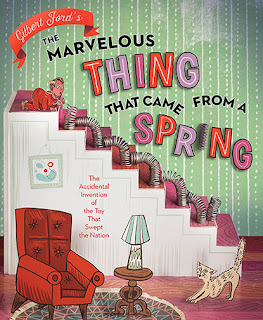 You may recognize his artwork on the front of some book covers in your bookstore...and these are just to name a few. You can see more covers on his website.

Gilbert and I both grew up in Jackson, MS, so it is a pleasure to interview him on what is possibly one of his most groundbreaking books to-date! He now lives in Brooklyn as a shut in, writing and illustrating from home.

Here, Gilbert answers some questions about what got him started as a writer/illustrator, his incredible illustration process for this book, and how he decided to write a picture book about the invention of the slinky.

When did you get your start as a writer/illustrator? How long have you been writing and illustrating?

I got my start when I was hired as a junior graphic designer at a small giftware company called Galison. They saw that I was creative so they transferred me to Mudpuppy, the kids’ division that they were trying to rebrand. At first, it was just my boss (Lorena Siminovich) and me. We had to come up with products and Lorena allowed me to write and illustrate an activity book. It did well and that gave me an appetite for writing and illustrating more books. That was 12 years ago.

For middle grade it was Roald Dahl books illustrated by Quentin Blake. I still love them.
For picture books, Chris Van Allsburg’s serious and mysterious stories and artwork inspired me. But I also loved the more playful and goofy stories of James Marshall.

Oh wow. There are a lot. I’m friends with a bunch of illustrators and writers in New York City who inspire me, give me career advice, and cheer me on. In fact, there’s so many of us that Peter Brown hosts a kidlit meet up every month in Brooklyn. Last time I went, I talked to Samantha Berger, Paul Zelinsky, Caron Levis, Michael Buckley, Dan Yaccarino, Angela Dominguez, Mike Curato, and Joyce Wan. I know I’m forgetting people and there are others all over the country that I keep in touch with through Facebook.  So I’ll just name a few whose work I like but I haven’t met: Neil Gaiman, Tomi Ungerer, and Miranda July.


Describe, in your own words, why you decided to create a picture book about the history of the Slinky and its inventor, Richard James.

I have a Slinky on my desk. If I’m not pacing around my apartment brainstorming, then I’m holding the slinky in my hands, hoping the magic idea will come to me. So that’s what sparked my interest.

So I wanted the book to inspire children to become inventors, too. With most bios, the invention is usually something completely out of reach for a child to do at their age. I understand that discovering electricity or inventing the telephone is something to aspire to, but the Slinky isn’t super complex, yet it was wildly successful. My hope is that after a read, the child will look at everyday objects with a sense of wonder and think of new uses for them. Anyone can do this simple gesture and become an inventor!

Describe your unique illustration process. This book in particular has amazing dioramas. What compelled you to work in 3-D?

Because I knew what the takeaway was, I had to be inventive with the artwork to reflect the story. The process for creating the dioramas was involved and used a lot of the current desktop publishing technology. I’m not sure if there is anything quite like it on the market. I’ll include the video for reference:

In every illustration, I tried to invent a new use for a found object in the diorama, to get the child thinking. So I used a washrag to represent a neighborhood lawn. I used a chalkboard to represent a starry night, a match to represent a pencil, and a Cool Whip cap to represent a trashcan. Discovering what was repurposed in these illustrations will be half the fun for the parent and child when they read the book a second time.

When creating a picture book, do you have the words in mind first, or the pictures?

I used to draw the pictures first and come up with the writing later and it never worked. It’s better to come at it by finding just the right story to tell, writing it in just the right way, and then illustrating it.

I love telling stories. I love to write, and I love to create artwork. When I’m able to combine all three, it’s more satisfying than Black Russian Cake, topped with a Kahlua glaze, sprinkled with bacon—all of that without any guilt!

What is next for you? Any future projects for us to look forward to?

Soldier Song (by Debbie Levy), an 80 page picture book about how music was used in the Civil War, comes out in February of 2017. In fall of that same year, another book I’ve authored and illustrated hits the shelves. It’s called How the Cookie Crumbled and it’s a nonfiction picture book about the invention of the chocolate chip cookie.

That cookie book sounds DELICIOUS! I can’t wait!
Thanks for stopping by Twenty by Jenny, Gilbert!

Buy a signed copy of THE MARVELOUS THING THAT CAME FROM A SPRING here!