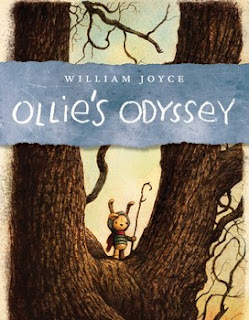 “Favorite. That was a very big word.
In the realm of toys, being favorited was a special distinction. It was as yum as it got. There can only be one favorite for every child, and Ollie was Billy’s.”

Ollie is a small and unassuming handmade toy. A stuffed rabbit with a tinkling bell for a heart and extra long ears, Ollie is a special toy, made by Billy’s mother when Billy was born with a hole in his heart. “Ollie’s head was usually pressed against Billy’s chest when he slept, so Ollie listened intently to his heartbeat. ‘I don’t hear a hole,’ Ollie thought, ‘but then, I don’t know what kind of sound a hole would make.’” Ollie is bestowed the highest honor in the Toy World: being a “favorite” to Billy.

As Billy and Ollie grow up together, they go on “A-ventures.” Sometimes, an “A-venture” is as simple as a trip to the grocery story. When it is just the two of them, Billy and Ollie go on especially “huge A-ventures [which] could be a trip to the moon via a rocket ship (really a refrigerator box), which sat in the backyard.” When an evil clown king, a forgotten toy named Zozo (who really despises favorite toys) has his henchmen toynap Ollie, Billy embarks on an epic “A-venture” to find his favorite toy. Ollie’s Odyssey is about the biggest “A-venture” of Ollie and Billy’s life, and it lasts the span of ten blocks.

William Joyce is the mastermind behind such books (and movies!) as The Guardians, A Day With Wilbur Robinson (which is Meet the Robinsons in movie form), and The Fantastic Flying Books of Mr. Morris Lessmore, which in addition to being an amazing book, is an Academy-Award winning film. His company, Moonbot Studios, produces movies and books and is located in Shreveport, Louisiana.

Ollie’s Odyssey is for those who enjoy Toy Story with the magic and creativity that is only found in Joyce’s work and will be a great addition to any library. Joyce knows the secret to childhood, how a child’s brain works, what constitutes “magic” in a child’s eyes, and it is evident in his mastery of illustration and writing.

Sometimes, the greatest adventures we take are the ones in our imaginations and the love that we share.

This review originally appeared in The Clarion Ledger.