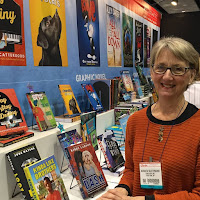 When anybody asks where I’m from, Mississippi is always the answer. I was born in Cleveland and lived there until I graduated from college. My family lives in Jackson, Batesville, and Oxford now, and I visit whenever they’ll let me. I’ve lived a lot of places, but about ten years ago, my husband and I moved to St. Petersburg, FL, where I write books, review a few, and read a lot.

When did you get your start as a writer? How long have you been writing?

For my entire career, I was a school librarian. I left that job, which I loved, because I wanted to see if I could write. That was in 2001. My first book [Glory Be] was published by Scholastic Press in 2012.

Alice in Wonderland, Little Women, anything that could be considered a series (Nancy Drew, Cherry Ames, you name it!), and the fairy tales my mother and grandmother read to me.

Top 3 favorite authors and illustrators that inspire you today?

Barbara O’Connor for her southern humor, Kirby Larson for her fabulously detailed historical fiction, and way too many others to name. I love reading middle-grade novels most of all.

In your own words, describe what Making Friends with Billy Wong is about.

Azalea Morgan prefers having one best friend and staying close to her Texas home, but when her grandmother needs her help, off she goes to Arkansas. Things are different there, the rules, the people. It’s the early 1950s, the dawn of the Civil Rights era. Her grandmother’s favorite grocery store is owned by a Chinese American family whose nephew, the outgoing, friendly Billy Wong, has recently come to work and to go to school in Paris Junction, Arkansas. Billy and Azalea learn a lot from each other—and from the community. It’s a friendship story told around actual history of the times.

I’m not much of an outliner but I do spend an inordinate amount of pre-writing time scribbling in notebooks, trying to figure out my characters. Because I write historical fiction, I do a lot of research which usually influences how the story plays out. Once I have my characters and the time and place, I work very hard to come up with a plot! Early drafting is not my favorite part of writing. I much prefer the fine-tuning, the editing, the deepening of stories.

You’ve written two other books for Middle Grade readers, and they are all set in distinct time periods and places. Describe the time and place you choose to use in Making Friends with Billy Wong.

The weekend was filled with stories of Chinese immigrants and their families who’d grown up in the Delta, including Arkansas. I wanted the town to be small, much like the ones I remembered from my own childhood. Everybody knows you and watches out for you!

The time just before Brown v. Board of Education seemed perfect for a boy like Billy Wong who wasn’t allowed to attend a segregated white school in his community but was able to thrive in a new school, in a new place.

I love the line “Maybe I shouldn’t climb trees to daydream in the clouds./ But high on a tree branch, stories pop wide open.” What does this line mean to you?

Billy’s voice turned out to be so much fun to write! Azalea was originally the only narrator of the story. But there was so much she couldn’t know. I tried writing Billy’s chapters as straight prose. They weren’t very interesting. In fact, my agent may have used the words “info dump” to describe them. One day I closed my computer and sat with a notebook and began scribbling. I made lists, wrote letters, listened closely, and Billy’s voice emerged. This was the first thing he said to me. He’s a dreamer, a storyteller, a connector, but he’s also a very responsible great-nephew who wants to help his family.

Who was the inspiration for Billy Wong? And why did you choose to write his thoughts in verse (a writing choice that I loved!)

Billy was inspired by a friend I went to Cleveland High School with. He was into everything! When we reconnected years later, he still was. Although he’s really not completely like my character, Bobby Joe Moon did answer my nonstop questions about his family’s stores and what it was like growing up in Mississippi.

I’m not sure I “chose” this form for his thoughts. They popped out, much like Billy’s stories, though of course, I did tweak them. But the variety, the brevity, the poetic feel to his words just seemed right.

In your author’s note you note that there were many Chinese Immigrants in the Mississippi Delta, where you grew up. What were things you noticed as a child that made it into the book?

I spent a lot of time with my grandmother and my mother shopping at various Chinese grocery stores in Cleveland. I remembered how it felt to hear their language spoken behind the meat counters and the cash registers. I especially remembered noticing the writing, the labels on boxes of things I didn’t recognize. But shopping at these stores was a completely normal, everyday part of my childhood. Later, when I told friends about this, they were very surprised. That’s when I thought I might have a story.

My own grandmother had a small garden behind her house. We picked beans in the hot summertime, a job I did not like a bit. But the sense of playing outside till dark, of having the freedom to ride our bikes all over town—those were the memories I brought to this novel.

What was your favorite scene to write in Making Friends with Billy Wong?

I always love writing the scenes that seem visual, the ones that play out in your head. I think this is what a good scene is, but it doesn’t always come easily. Perhaps my favorite scenes were the ones that Willis DeLoach took over. When Billy and Azalea sneak out to his trailer in the pecan grove, when he barges into the historical room at the library—Willis is a complicated fellow and I think he makes the scenes more interesting, don’t you?

What do you love about writing books for children?

I love the editing, the tweaking, the adding little details. I also really love talking to students and teachers about writing and books.

I always hope there’s a future project! As soon as I figure it out, I’ll let you know.